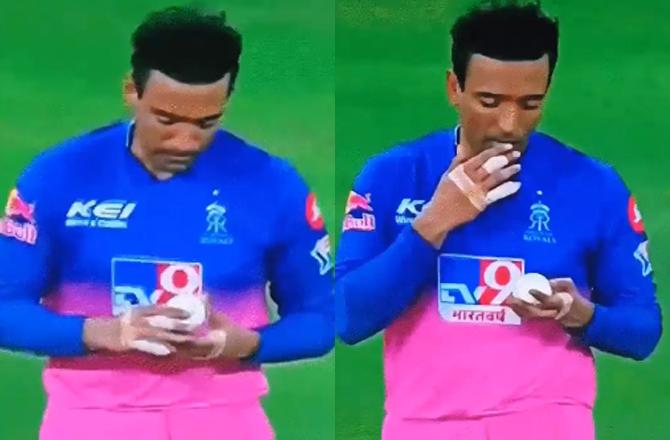 What is seen as a violation of International Cricket Council(ICC) rules, Rajasthan Royals(RR) player Robin Uthappa applies saliva on the ball while fielding in the third over of the IPL match in Dubai against Kolkata Knight Riders(KKR)on Wednesday. In the wake of the COVID-19 pandemic using saliva on the ball is banned. Sweat however can be used to shine the ball.

“The ICC Cricket Committee heard from the Chair of the ICC Medical Advisory Committee Dr Peter Harcourt regarding the elevated risk of the transmission of the virus through saliva, and unanimously agreed to recommend that the use of saliva to polish the ball be prohibited,” Read an ICC release ahead of the IPL.

The incident took place when Uthappa dropped an easy catch after opening batsman Sunil Narine played a lofted shot in an attempt to clear the in-field. He was seen applying saliva on the ball on the mid-on region. The video of the incident has gone viral on social media.

According to ICC rules, repeated use of saliva on the ball will result in a 5 run penalty to the batting side. However, the team can be issued upto two warnings per innings. There is no statement from the IPL committee so far.

KKR batted first in the match and scored 174 runs, winning the match against RR. Royals were restricted to 137/9 with KKR winning by 37 runs.