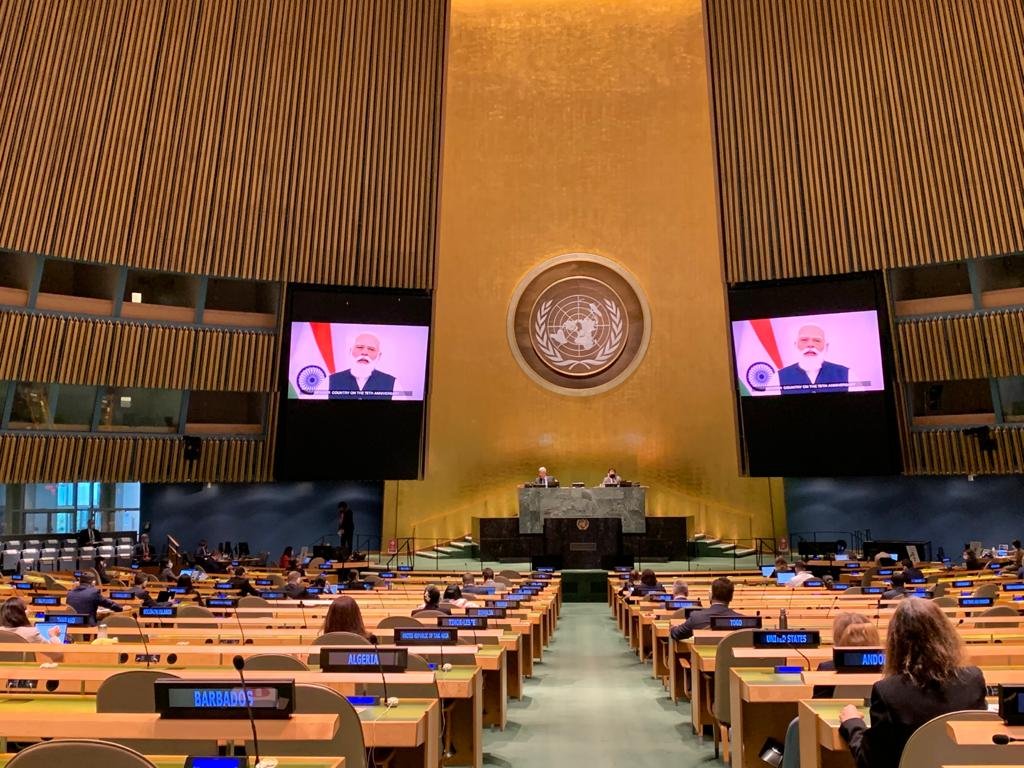 ShareTweetGoogleWhatsappPrint
Mail
Prime Minister Narendra Modi addressed the annual UN General Assembly. Owing to the COVID-19 pandemic, this year’s UN General Assembly is being held virtually, as almost all world leaders are delivering their speeches in a pre-recorded video format. The statement is being broadcast at the UN General Assembly hall in New York. This year – 2020 – marks the 75th session of the UNGA, which was started in 1945, after the end of World War II.

India is proud of the fact that it is the founding member of UN. The world was significantly different in 1945. The problems, solutions were all different. The challenges of our present and future are now different. The international community is faced with an important question. Is the UN of 1945 still relevant?

It is true that the Third World War did not happen to say, but it cannot be denied that there have been many wars, many civil wars have also taken place. How many terror attacks kept the rivers of blood flowing. In these wars, in these attacks, the people who were killed were human beings like you.

In the UN Security Council, India will always speak for peace, security and prosperity; will not hesitate in raising its voice against the enemies of humanity, human race and human values.

Changes in UN reactions, changes in arrangements, change in appearance- Today is the need of the hour. The people of India have been waiting for a long time to complete the process that is going on with the reforms of the United Nations. People of India are worried whether this process will ever reach the logical end. After all, how long India will be kept separate from the decision making structures of the United Nations.

Today, people of India are concerned whether this reform-process will ever reach its logical conclusion. For how long will India be kept out of the decision-making structures of the United Nations?

Reform in the responses, in the processes, and in the very character of the UN  is the need of the hour. It is a fact that the faith & respect that the UN enjoys among the 1.3 billion people in India is unparalleled.

“India’s vaccine production and delivery capacity will be used to help all humanity in fighting this crisis”.

Over the last 8 to 9 months, the whole world has been battling the pandemic of the Coronavirus. Where is the United Nations in this joint fight against the pandemic? Where is its effective response?
When we were strong, we were never a threat to the world, when we were weak, we never became a burden. Ideals on which the the UN was founded and India’s very own fundamental philosophy have much in common. Within the halls of the UN, one has often heard the words, the world is one family. We treat the whole world as a family.

Gesture of friendship by India towards one country is not directed against any other country.

India sent its brave soldiers to about 15 countries to keep peace. India has lost the maximum number of its soldiers in keeping peace, Every Indian, aspires for India’s expanded role in the UN, seeing India’s contributions towards it.

India is among the leading countries in the world in terms of digital transactions. India is ensuring empowerment and transparency by giving digital access to its millions of citizens.
It was not easy to connect more than 400 million people in the banking system in just 4-5 years, but India has done this. It was not easy to get 600 million people free from open defecation in just 4-5 years, and India has done this as well.

How long will India be kept out of the decision making structures of the United Nations?

Over the past few years, with the mantra of Reform-Perform-Transform, India has brought about major changes in the lives of crores of Indians. These experiences are as useful for many countries of the world as for us.

The cultural heritage of India, its sacraments, thousands of years of experience will always give strength to developing countries.

Starting from January next year, India will also fulfil its responsibility as a non-permanent member of the Security Council. India will always speak in support of peace, security and prosperity.

We are moving forward with a vision of “self-reliant India” that will also be a force multiplier for the global economy.

We will use the prestige and experience of being the largest democracy in the world for world interest. Our path is from Janakalyan to Jagakalyan. India’s voice will always rise for peace, security, and prosperity.

In this difficult time of Pandemic, India’s pharmaceutical industry has sent essential medicines to more than 150 countries.

As the world’s largest vaccine producing country, I want to give another assurance to the global community. India’s vaccine production and vaccine delivery capability will work to take the whole humanity out of this crisis.

The country that has lived for years leading the global economy and years of slavery. In a country where changes are effected on a large part of the world, how long will that country have to wait?

When India extends the hand of friendship to someone, it is not against any third country. When India strengthens the development partnership, there is no thought of forcing a partner country behind it. We never lag behind sharing experiences from our development journey.

There are large-scale efforts in India to promote women entrepreneurship. Today, women of India are taking the most benefit of the world’s largest micro financing schemes. India is one of the countries where women are being given 26 weeks of Paid Maternity Leave.

Following the circumstances created after pandemic, we are moving forward with the vision of “self-reliant India”.  There will also be a force multiplier for global economy, a self-reliant India campaign. In India, it is being ensured that the benefits of all schemes, without any discrimination, reach every citizen.

India is running a campaign to deliver drinking water from pipes to 150 million homes in its villages. A few days ago, India has started a very big plan to connect its 6 lakh villages with broadband optical fiber.

On the occasion of 75th anniversary, let us all dedicate ourselves for welfare of the world.