Home NM FACT CHECKER Fact Check: Old video of couple setting themselves on fire in a...

A horrific video of people enveloped in fire is being shared on social media. The post implies that the people in the video are farmers, who have set themselves on fire.

The caption of the post draws a comparison between farmers’ suicide, which are not reported as often as the suicide of Bollywood actor Sushant Singh Rajput, which is being covered extensively by media.

(Translation: If a farmer dies, let him die. He is not Sushant. If a field or barn is destroyed, let it be. It’s not Kangana’s house or office)

NewsMobile fact-checked the post and found it to be false and misleading.

We extracted the keyframes of the video using InVId tool and put those keyframes through Reverse Image Search.

The search led us to a report by NDTV dated August 29, 2019, featuring the same video.  The headline of the report read: Couple Set Themselves On Fire Inside Police Station In UP.

According to the report, the incident happened at the Surir police station in Mathura and the couple reportedly set themselves on fire, alleging inaction by the police over their complaint, that some village strongmen were harassing them. 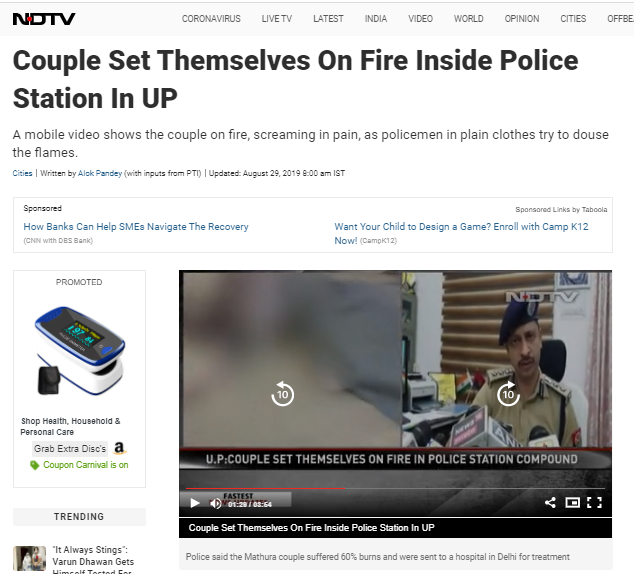 The report also stated that three policemen including the in-charge of a police station in Uttar Pradesh’s Mathura district were suspended and an inquiry was ordered.

The same incident was also covered by Hindustan Times, Deccan chronicle and TOI.

We also found a report by News 18, dated September 7, 2019, that the woman had succumbed to injuries. 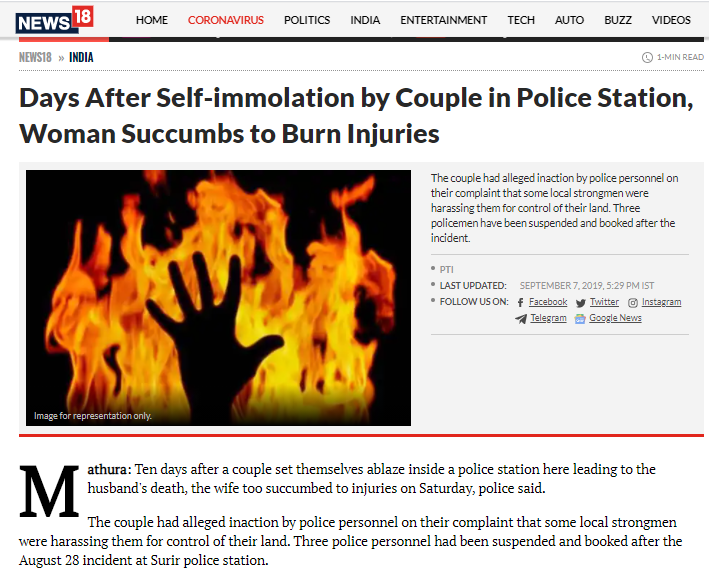 “While husband Joginder died due to burn injuries in Safdarjung Hospital, Delhi on September 1, his wife Chandravati, admitted in the same hospital, succumbed to burn injuries today,” the report quoted DSP Ankur Agrawal as saying.

On further research, we also found a brief by SSP Mathura about the same incident dated August 2019.

Hence, from the above fact check, we can say that that the post in circulation is misleading and false.