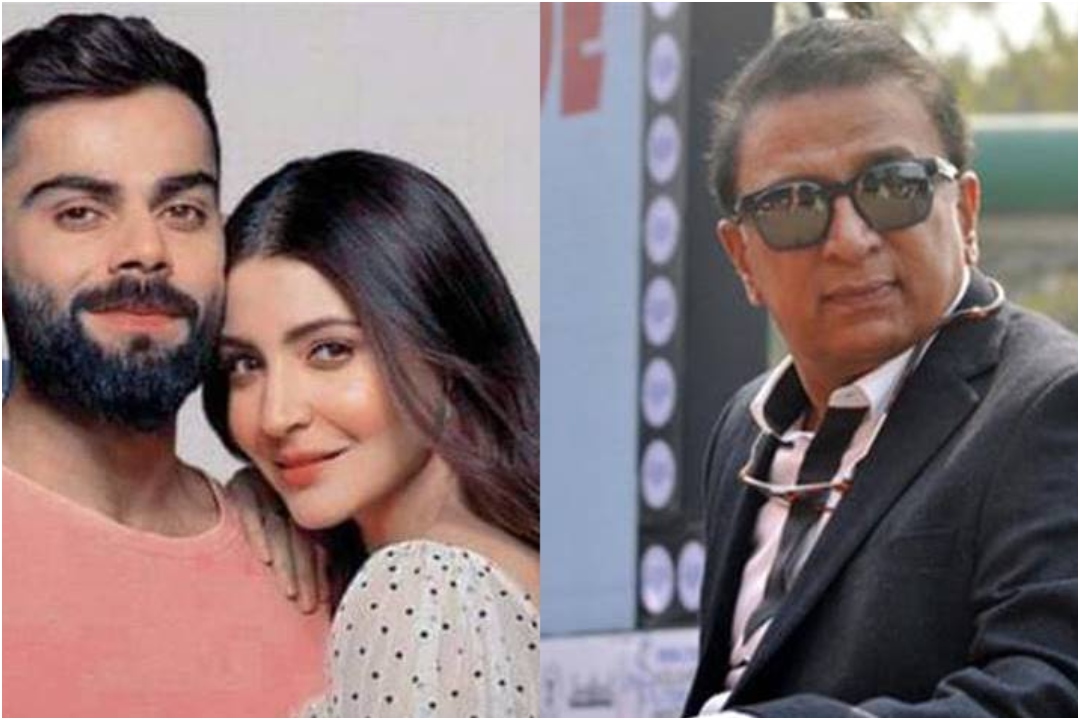 Sunil Gavaskar on Friday responded to Anushka Sharma and has clarified that he did not blame her for Virat Kohli’s failures.

Speaking to India Today, Gavaskar said that he did not blame Anushka and that he has always asked for the wives of players to accompany them on foreign tours.

“You know me, I am the one who has always batted for wives going with husbands on tour. I am the one that a normal guy going to the office for a 9-5 job, when he comes back home, he comes back to his wife. Similarly, cricketers, when they go out for a tour or even when they are playing at home, why can’t they have their wives with them?

“Because after their working hours are over, they have to get back to their wives like every other common man does. So I am not blaming her.”, Gavaskar said.

Kohli was dismissed for just a run on Thursday and Gavaskar made a remark on how the India and RCB skipper hardly had any training time against quality bowling during the coronavirus-induced break. He also used Kohli’s wife, Anushka’s name while making the remark.

Reacting to being dragged into the episode, the actor took to Instagram and wrote: “That, Mr Gavaskar, your message is distasteful is a fact but I would love for you to explain why you thought of making such a sweeping statement on a wife accusing her for her husband’s game? I’m sure over the years you have respected the private lives of every cricketer while commenting on the game. Don’t you think you should have equal amount of respect for me and us?” 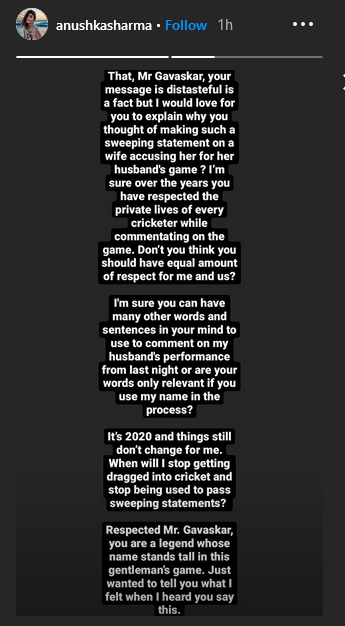 Anushka went on to ask Gavaskar if his comments are relevant only if he uses her name? “I’m sure you can have many other words and sentences in your mind to use to comment on my husband’s performance from last night or are your words only relevant if you use my name in the process? It is 2020 and things still don’t change for me. When will I stop getting dragged into cricket and stop being used to pass weeping statements? Respected Mr Gavaskar, you are a legend whose name stands tall in this gentleman’s game. Just wanted to tell you what I felt when I heard you say this,” she said.

Having started the season with a win, RCB didn’t have a good outing against KXIP on Thursday as they lost by 97 runs at the Dubai Cricket Stadium. Kohli made no bones about the fact that it was a bad day in the office not just for the team, but also for him individually.

“Yeah it didn’t (go well). I think we were good in the middle phase with the ball, they got off to a decent start and we pulled things back nicely. I have to stand in front and take the brunt of it, not the best day in the office, couple of important chances of KL when he was set and that cost us 35-40 runs at a later stage,” he had said in the post-match presentation ceremony.

It’s significant to note that Virat and Anushka are expecting their first child which they announced in August this year.

Notably, ever since she started dating Virat, Anushka Sharma has been repeatedly blamed and trolled whenever he gave a bad performance on the field.