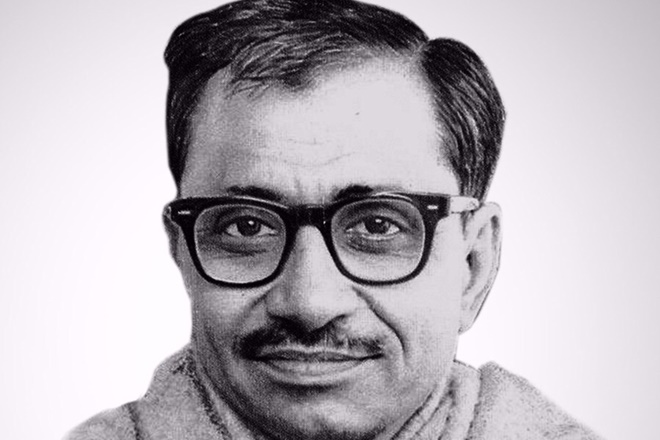 Upadhyaya devised the political philosophy of Integral Humanism. This philosophy advocates the simultaneous and integrated program of the body, mind and intellect and soul of each human being. He visualised India as a decentralised polity and self-reliant economy with the village as the base. He believed in ‘Swaraj’ (self-governance).

Born in village Chandrabhan (now called Deendayal Dham), near the Farah town in Mathura district, he was brought up by his maternal uncle. His mother passed away when he was three and his father died when he was just eight.

He went to high school in Pilani Jhunjhunu, Rajasthan and did his Intermediate at the Birla College, Pilani. He did his B. A. at the Sanatan Dharma College, Kanpur in 1939 after which he joined St. John’s College, Agra to pursue a master’s degree in English literature.

He started working full-time in the RSS from 1942. He underwent training in Sangh Education in the 40- day summer vacation RSS camp at Nagpur and after completing his second-year training in the RSS Education Wing, Upadhyaya became a permanent pracharak of the RSS. He worked as the pracharak for the Lakhimpur district. In 1955, he worked as the joint ‘prant pracharak’ (regional organizer) for Uttar Pradesh.

In 1951, Dr Syama Prasad Mookerjee founded the Bharatiya Jana Sangh. Deendayal was appointed as General Secretary of the Uttar Pradesh branch and was later the all-India General Secretary where he served for 15 years. He also contested for the Lok Sabha from Uttar Pradesh, but failed to gain any political attention and hence did not get elected.

In December 1967, Upadhyaya was elected as the president of the Jana Sangh.

Mystery around how he met his end

Mystery shrouds the circumstances of his death. Even after 50 years after his body was found near Mughalsarai railway station, it is not clear how he died.

On 10 February 1968, he boarded the Sealdah Express for Patna from Lucknow. The train reached Mughalsarai but Upadhyaya was not found on the train. There are many theories about the what happened. The most widely believed is that he was murdered under mysterious circumstances on 11 February 1968 while traveling. His body was found near Mughalsarai railway station in Uttar Pradesh 10 minutes after the train arrived.

His body was lying near a traction pole 748 feet from the end of the platform of Mughalsarai station where the train halted. He was clutching a five-rupee note in his hand. He was last seen alive at Jaunpur after midnight.