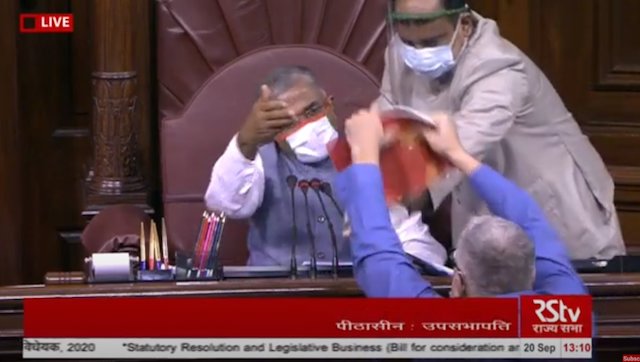 Rajya Sabha Deputy Chairman Harivansh on Tuesday wrote to President Ram Nath Kovind over the ruckus in the Rajya Sabha on September 20 by Opposition leaders.

The Rajya Sabha MP said he was tensed and in mental distress over the events on the day and said it has damaged the reputation of the House and Chair.

Prime Minister Narendra Modi also reacted to the letter and tweeted, “I read the entire letter written by Harivansh ji to President Ram Nath Kovind. Each word of the letter has reaffirmed our faith in democracy. This letter is inspiring and praiseworthy. It contains truth and sensitivity. I request all citizens to read it,” (roughly translated from Hindi). The Prime Minister also posted a copy of the letter along with the tweet.

The Deputy Chairman also mentioned that the sight of Opposition leaders getting up on the table of the officials of the House, raising unparliamentary and crude slogans and the violent behaviour has stayed with him.

Narrating his humble origins, the Deputy Chairman said while “persons like me will come and go” but the “temple of democracy, the Parliament will always be a source of inspiration for the country and society”, highlighting that he was more affected by the disrespect shown to the Chair.

He also mentioned that Bihar, from where he hails, was the place where the first concept of Republic was developed and then went on to add the movement of Champaran, which made Mahatma Gandhi a national hero, along with the movement started by Lok Nayak Jayaprakash Narayan and other leaders for safeguarding the democracy.

“Gandhi, Lohia, JP, Karpuri Thakur, Chandrashekhar and others like them have taught me values. These were killed before me in the Upper House,” he said.

After Harivansh conveyed to the President that he is going to do a one-day fast in the hope that the Opposition leaders realise their mistake, he, however, added that he will take part in the proceedings of the House as usual so that the parliamentary work does not get affected.

“The son of Bihar, National Poet Dinkar was a two-time member of the Rajya Sabha. Tomorrow, September 23 is his birth anniversary. From September 22 till September 23 morning I will keep a 24-hour fast. It should not affect the House’s proceedings, therefore, even during the fast I will take part in the work as usual,” Harivansh said in his letter.

The Rajya Sabha witnessed unruly scenes on Sunday as Opposition members stormed the well of the House and reached the Deputy Chairman’s seat to protest against the Farmer’s Produce Trade and Commerce (Promotion and Facilitation) Bill, 2020 and the Farmers (Empowerment and Protection) Agreement of Price Assurance and Farm Services Bill, 2020. Later, eight MPs were suspended by the Rajya Sabha Chairman on Monday over the ruckus created in the Upper House.