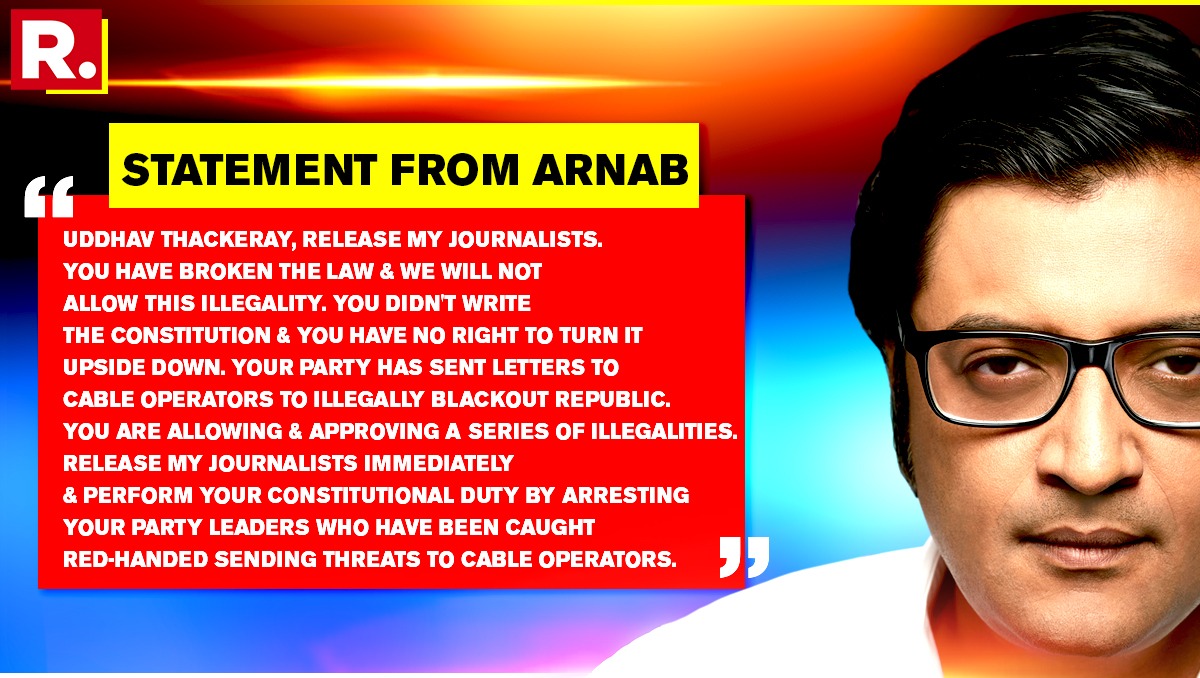 Republic TV Editor-in-Chief Arnab Goswami has issued a statement hitting out at Maharashtra Chief Minister Uddhav Thackeray after the state Government went all out in trying to block their channel and intimidate Republic TV reporter Anuj who is now in jail.

Giving a stern message to Maharashtra CM, Arnab said in his statement, “Uddhav Thackeray, release my journalists. You have broken the law and we will not allow this illegality. You didn’t write the constitution & you have no right to turn it upside down. Your party has sent letters to cable operators to illegally blackout Republic you are allowing & approving a series of illegalities. Release my journalists immediately and perform your constitutional duty by arresting your party leaders who have been caught red-handed sending threats to cable operators.”

Laying stress on the release of his jailed journalists, Arnab further added, “I am a Mumbaikar. I have built Republic with hard work and effort. You cannot touch our network. The people of Mumbai, Maharashtra and India are with us. Uddhav Thackeray, release my journalists immediately. And arrest your party leaders who are issuing threats to blackout the distribution of Republic Bharat. If you don’t, I will fight you in both the courts of public opinion & our country’s highest courts.”

Two Republic TV reporters and a driver were arrested by the Mumbai Police on charges of ‘trespassing.’ Efforts are on to get them released.

A statement issued by the Raigad Police on Wednesday said “three suspicious persons” entered the premises illegally around 7.30 pm on Tuesday following which they manhandled and threatened the security guard of the farmhouse.

The Republic TV crew were booked under Sections 452 (house-trespass after preparation for hurt, assault or wrongful restraint); 448 (punishment for house-trespass); 323 (punishment for voluntarily causing hurt); 504 (intentional insult with intent to provoke breach of the peace); 506 (criminal intimidation) and 34 (common intention) of the IPC.

They were produced before a court in Khalapur and remanded in police custody until September 14.