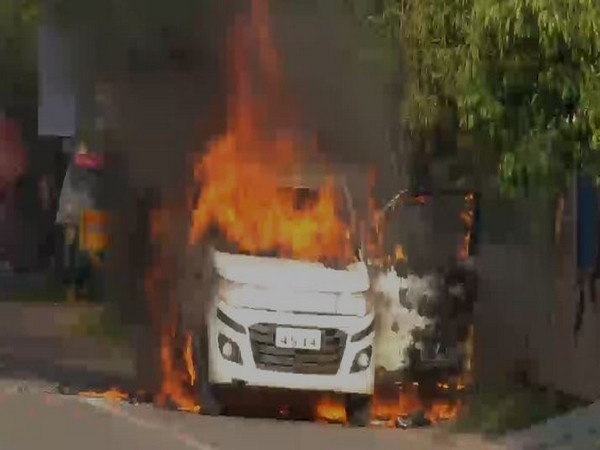 A man allegedly locked three people inside a car and burnt it down in Andhra Pradesh’s Vijayawada on Monday, police said. According to the Vijayawada deputy commissioner of police, V Harshavardhan Raju, one of the three injured is in a critical condition, while search operation to find the accused are still underway. The accused, Venugopal Reddy, had run away from the spot after committing the crime.

“Venugopal Reddy was a business partner with Gangadhar some time ago. They used to buy and sell second-hand cars. However, their business did not run well. After incurring losses, Venugopal and Gangadhar parted ways,” Vijayawada DCP told ANI.

The DCP further added that the accused had been trying to talk to Gangadhar, but he did not respond.

The police also mentioned that Gangadhar, his wife Nagavalli, and friend Krishna Reddy went to a place in Vijayawada to meet Venugopal.

“All four persons are discussing the matter in the car. At around 4.45 PM, Venugopal got down the car on the pretext of smoking a cigarette. He poured the petrol, which he brought in a whiskey bottle, on the car and set it ablaze. Venugopal Reddy ran away from the spot,” DCP Harshavardhan told ANI.

“The police took the victims to a hospital. While Krishna Reddy is met with serious burns, Gangadhar and Nagavalli suffered minor injuries. After the first aid, Nagavalli went home. Gangadhar was taken to Patamata Police Station for a statement,” he said.