Home NM FACT CHECKER Fact Check: IPS Vinay Tiwari has not been transferred to CBI to... 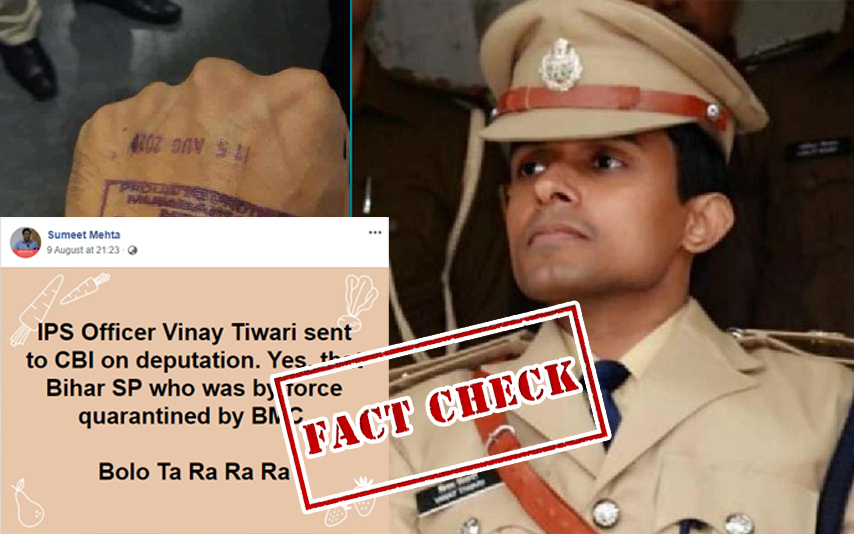 The investigation of the death of the Bollywood actor Sushant Singh Rajput has been handed over to the Central Bureau of Investigation (CBI).

Following the news, posts started making rounds on social media with a claim that Vinay Tiwari, the IPS officer from Bihar who was sent into quarantine when he went to Mumbai to probe the actor’s death, has now been transferred to CBI.

“IPS Officer Vinay Tiwari sent to CBI on deputation. Yes, that Bihar SP who was by force quarantined by BMC, ” the posts claimed.

NewsMobile fact-checked the post and found the claims to be false.

Refuting such claims, Tiwari himself clarified on Twitter that the claims are rumours.

Moreover, in a report published by The Times of India, Tiwari denied this fake news. “Neither I have requested for central deputation nor the CBI has communicated anything in this regard to me,” he told TOI.

A CBI spokesperson also confirmed to NewsMobile that the viral claim is false.

We also found several reports suggesting that Vinay Tiwari returned to Patna on the night of August 7-8, 2020.

Hence, based on our fact check, it is clear that the post in question is fake.