Laying a 40-kg silver brick during the grand Bhoomi puja ceremony for the construction of the much-awaited Ram temple at Ayodhya, Prime Minister Narendra Modi put out a message unifying 1.3 billion Indians saying ‘Lord Ram is for everyone, Lord Ram is in everyone’.

Outlining how India is celebrating on this momentous occasion, PM Modi said, “The Ram temple is a symbol of unity, it is a symbol for development. The temple is a modern symbol of tradition and a golden chapter is being written as India celebrates today.”

Reiterating how fortunate he was to be a part of this historic event, PM Modi said, “Ram has immense powers and he is within us. The Ram Mandir is a symbol of national sentiment and a dream come true. I congratulate all devotees. Lord Ram is an emblem of India’s unity in diversity. The entire world is witnessing history being made.” 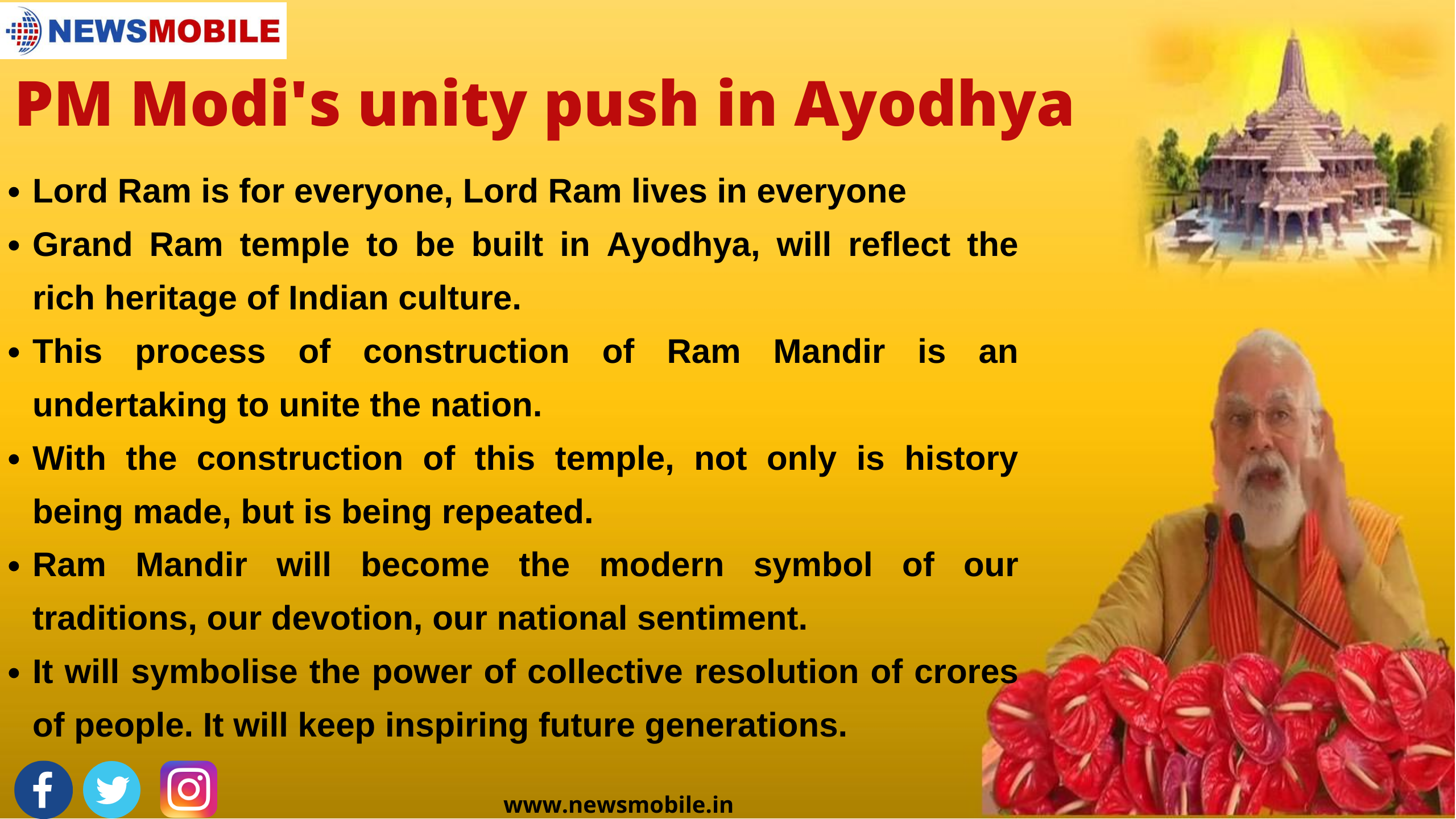 Describing Lord Ram as “Maryada Purushottam”, he said, “India is emotional and has waited for this day for decades. The temple will teach peace, love and determination. Ram Mandir will unite the whole country, it will change the economy of the region. The fight for the Mandir was like the like for freedom. Lord Ram’s inspiration can be found in teachings of Kabir and Guru Nanak as well.”

Lord Ram is everyone’s, Lord Ram resides in everyone.

Ram Temple construction not just marks a historic moment, it is a reminder that history repeats itself.

This day is a proof of the resolve of crores of devotees. This day is a unique gift of truth, non-violence, faith and sacrifice to India, a country that loves justice.

Today’s bhoomi pujan is being held amid many challenges. It sets an example similar to how Shri Ram adhered to limits. This example was also set when the top court announced its decision last year.

The Ram Mandir won’t just add to the beauty of Ayodhya, it will also change the face of the area and more opportunities will be created. People from across the world will come over here for darshan of Lord Ram and Janaki Mata.

This temple will become a symbol of resolve of crores of people.

There’s hardly any aspect of life where we don’t draw inspiration from Lord Ram. There’s no national sentiment that doesn’t reflect his values.