A day ahead of the historic bhoomi pujan for the Ram Mandir at Ayodhya, the four-phased Ramarchan Puja has begun to invoke the major gods and goddesses who consider Lord Ram as their ‘Ishth’ or the god of worship at Ayodhya. The prayers began around 10:30 am on Tuesday with Vedic saints conducting the prayers facing Ramlalla on his temporary seat.
As part of the religious ceremonies ahead of main bhoomi pujan on August 5, Lord Ganesh prayers were conducted on Monday.

Elaborating on the importance of Ramarchan Pujan, Satyanarayan Das, the priest reciting mantras in the pujan told ANI, “In our Vaishnav mode of prayers, Ramarchan prayers are taken from Bhavishtottar Khand. Before Lord Ram arrives, we invite and worship every important god and goddess. These gods and goddesses would acknowledge Lord Ram as their ‘Ishth’ (god of worship). It is after praying to them, we begin prayers of Lord Ram and Goddess Sita.”

According to Das, every god and goddesses has a distinct place in the puja mandap.
Gods and goddesses like Mahadevi, Lord Shankar, Ganesh, 10 digpal and Shodash Mata are worshipped in these prayers.

Lord Ram will be worshipped by chanting of his 1,008 names and offered tulsi.
Mahesh Bhagchandka, one of the Yajman in the Bhoomi Pujan and trustee of Ashok Singhal Foundation also participated in the ceremony.

“This is blessings of Lord Ram and elders. We were waiting for this for 500 years. Ashok Ji departed from this world but everyone around him took to his cause and we would be doing Bhoomi Pujan tomorrow. Yesterday, we prayed to Lord Ganesh with 108 laddoos,” stated Bhagchandka. 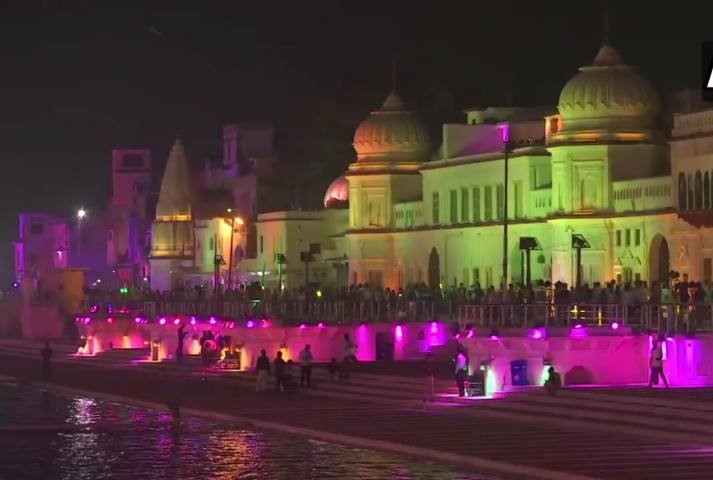 Prime Minister Narendra Modi is scheduled to lay the foundation stone of the Ram Temple in Ayodhya on August 5. An unprecedented multi-layered security net has been thrown around Ayodhya. PM Modi will be taking a flight to Lucknow at 9.30 am and from there take a chopper to Ayodhya where he is expected to land at around 11.30 am and spend about two hours. PM will also be offereing prayers at Hanumangarhi. He will then be reaching the Ram Janmabhoomi Sthal for the main bhoomi pujan ceremony around noon which is slated to take place around 12.40 pm. PM is expected to fly out of Ayodhya post the ceremony.

Yogi Adityanath has personally overseen the preparations at Ayodhya and has put out an earnest request to people not to come to the temple for the ceremony in view of the coronavirus pandemic. Coded invites have already been sent out for the event which is likely to be attended by about 140 plus dignitaries.

Incidentally, Md Yunus of Faizabad, who received the Padma Shri for performing last rites of unclaimed corpses, has also been invited along with one of the main litigants in the Ayodhya land dispute case Iqbal Ansari.