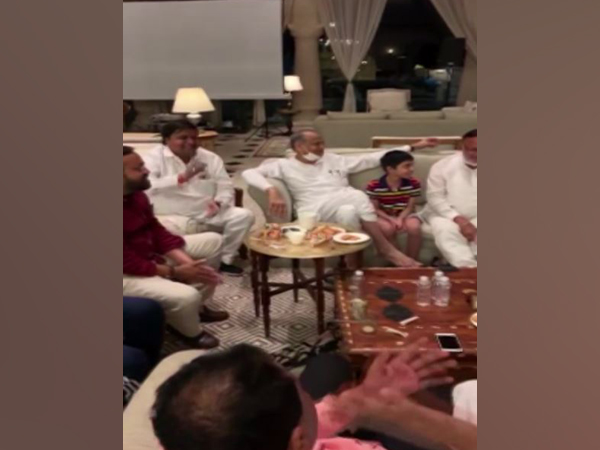 Congress MLAs along with Chief Minister Ashok Gehlot were heard singing “Hum Honge Kamyaab” at a hotel in Jaipur late last night in an apparent indication of solidarity amid the political crisis in the State.

The Congress MLAs in favour of the state government led by Gehlot have been lodged at Hotel Fairmont amid the political turmoil in Rajasthan.

In a video, the Congress MLAs backing CM Gehlot were seen sitting in a circle, clapping and singing the song.

Meanwhile, BJP leader Sambit Patra took a jibe at Congress, stating that these MLAs are neglecting the people of their constituencies as they are busy watching movies and learning how to make ‘pizza, pasta’.

While the Congress has 107 MLAs, including 19 who have been issued notices of disqualification by the assembly speaker on a complaint by chief whip Mahesh Joshi, the BJP has 72 lawmakers in the 200-member Rajasthan assembly.

Congress has accused BJP of indulging in horse-trading to bring down the Gehlot government. The BJP has rejected the allegations.

The Congress government in Rajasthan continues to be in turmoil after simmering differences between Sachin Pilot and Chief Minister Ashok Gehlot came out in the open.

Pilot has been sacked from the posts of Rajasthan Deputy Chief Minister and state PCC president.