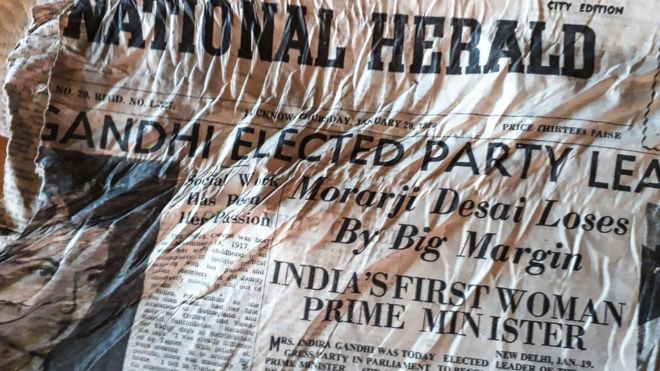 Indian newspaper copies with headlines such as “India’s First Woman Prime Minister”, referring to Indira Gandhi’s election win in 1966, have been recovered from the melting French glacier of Bossons on the Mont Blanc mountain range in western Europe, 54 years after an Air India plane crashed there.

The newspapers belong to the residue of an Air India plane that crashed into Europe’s highest mountain on January 24, 1966, and were discovered by Timothee Mottin, who runs the cafe-restaurant La Cabane du Cerro at an altitude of 1,350 metres above the French resort of Chamonix.

“They are drying now but they are in very good condition. You can read them,” Mr Mottin, 33, told the local French daily ‘Le Daupine Libere’, quoted by The Guardian newspaper and other agencies in the UK.

“It’s not unusual. Every time we walk on the glacier with friends, we find remains of the crash. With experience, you know where they are. They are being carried along by the glacier according to their size,” he said.

The Air India Boeing 707 had crashed into the range after a verbal flight control miscommunication, leading to the loss of all 177 passengers and crew.

Copies of the “National Herald” and “Economic Times” are among a dozen newspapers discovered by Mr Mottin, whose cafe is about 45 minutes by foot from the Bossons glacier, where the plane named after the Himalayan peak of Kangchenjunga mysteriously crashed over 54 years ago.

Mr Mottin said he was lucky to discover the papers when he did because the ice in which they had been encased for nearly six decades had probably only just melted. Once the papers have dried out, they will join a growing collection of items from the crash that Mr Mottin has put on display at his cafe to share it with visitors.

Since 2012, there have been a number of finds relating to the 1966 Air India crash emerging from the melting ice caps.

In 2012, a bag of diplomatic mail, stamped “On Indian Government Service, Diplomatic Mail, Ministry of External Affairs”, was recovered, while a year later a French climber found a metal box containing the Air India logo containing emeralds, sapphires and rubies worth between GBP 117,000 and GBP 230,000.

Human remains found in the area in 2017 are also believed to come from the 1966 crash or that of another Indian plane, the Malabar Princess, that came down in the area in 1950.