India’s 2018 Tiger Census has made it to the Guinness Book of World Records for being the world’s largest on-camera wildlife survey. The fourth cycle of the All India Tiger Estimation 2018, has made a world record of being the largest ever camera trap wildlife survey, the results of which were declared to the nation on Global Tiger Day last year by Prime Minister Narendra Modi . 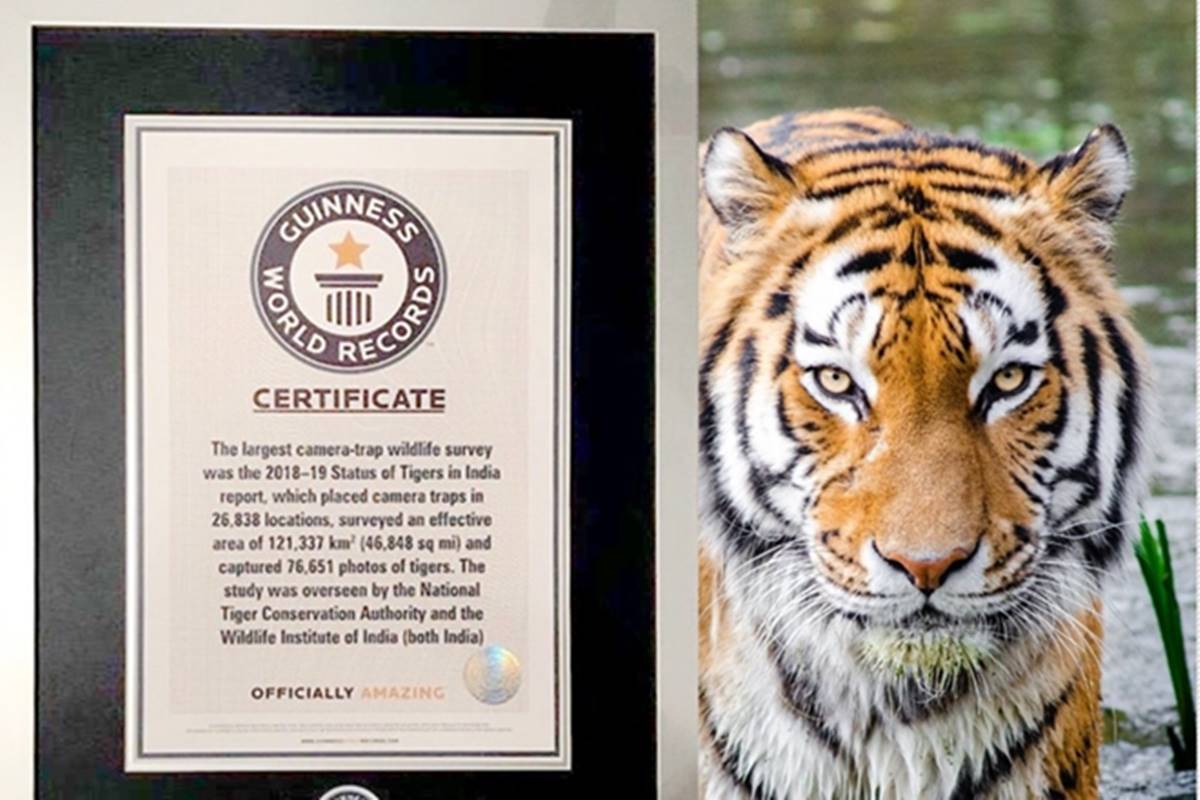 Terming this achievement a great moment, Union Environment Minister, Shri Prakash Javadekar in a tweet said, Under the leadership of Prime Minister Narendra Modi India fulfilled its resolve to double tiger numbers 4 years before the target through ‘Sankalp se Siddhi’.

The citation at the Guinness World Record website stated, “The fourth iteration of the survey – conducted in 2018-19 – was the most comprehensive to date, in terms of both resource and data amassed. Camera traps (outdoor photographic devices fitted with motion sensors that start recording when an animal passes by) were placed in 26,838 locations across 141 different sites and surveyed an effective area of 121,337 square kilometres (46,848 square miles).”

“In total, the camera traps captured 34,858,623 photographs of wildlife (76,651 of which were tigers and 51,777 were leopards; the remainder were other native fauna). From these photographs, 2,461 individual tigers (excluding cubs) were identified using stripe-pattern-recognition software.”

As well as unprecedented camera trap usage, the 2018 “Status of Tigers in India” assessment also conducted extensive foot surveys that covered 522,996 km (324,975 mi) of trails and sampled 317,958 habitat plots for vegetation and prey dung. The latest results of the assessment had shown that India now has an estimated 2967 tigers out of which 2461 individual tigers have been photo captured a whopping 83 % of the tiger population, highlighting the comprehensive nature of the survey.

The National Tiger Conservation Authority runs the tiger census with technical support by the Wildlife Institute of India and is implemented by the state forest departments and partners. The 2018 results show that the total estimated tiger population in India is now 2,967, of which 2,461 tigers have been captured individually, accounting for 83% of the tiger population. Now, India has firmly established its role in tiger conservation, which is considered as a standard worldwide.