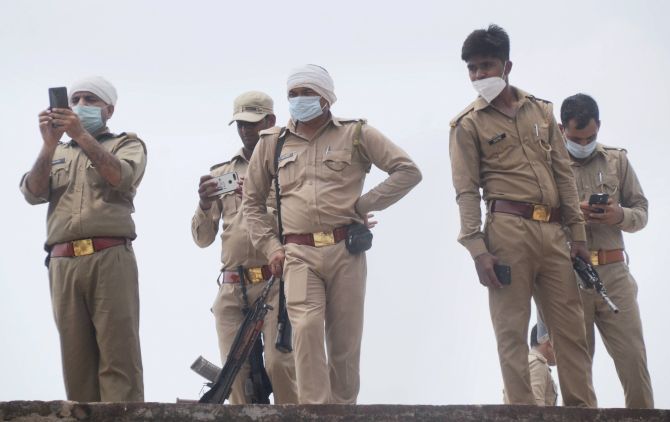 Kanpur: Ten police constables have been transferred from police line to Chaubepur police station, according to an official order.

Inspector-General of Police (IGP) Kanpur, Mohit Agarwal, has informed that all personnel of the Chaubepur police station are under the scope of investigation in connection with the Kanpur encounter.

Last week, three Uttar Pradesh police personnel were suspended on suspicion of being involved in passing on information to Vikas Dubey. Kanpur IG has said that 25 teams from 40 police stations have been formed to investigate the details of the case.

Gangster Vikas Dubey has been all over the news after killing 8 policeman in an encounter last week. The martyred included Mahesh Yadav, who was the station officer of Shivrajpur, Anup Kumar, Babulal and constables Sultan Singh, Rahul, Jitendra and Babloo Singh.

Meanwhile, important revelations have surfaced in the case. Police have arrested the daughter-in-law and 2 neighbours of the gangster. It is being told that these people also supported Vikas Dubey on the night of the encounter. The three have been identified as Shama, Suresh Verma and Rekha respectively.

Since the beginning of this case, reward on Dubey’s head has increased five folds, from Rs.50,000 when the search operations began to Rs. 2.5 lacs at present.

The police has ensured all security is on alert to ensure that Vikas Dubey does not go out of the state. The borders are sealed and strict checkposts have been put up everywhere.