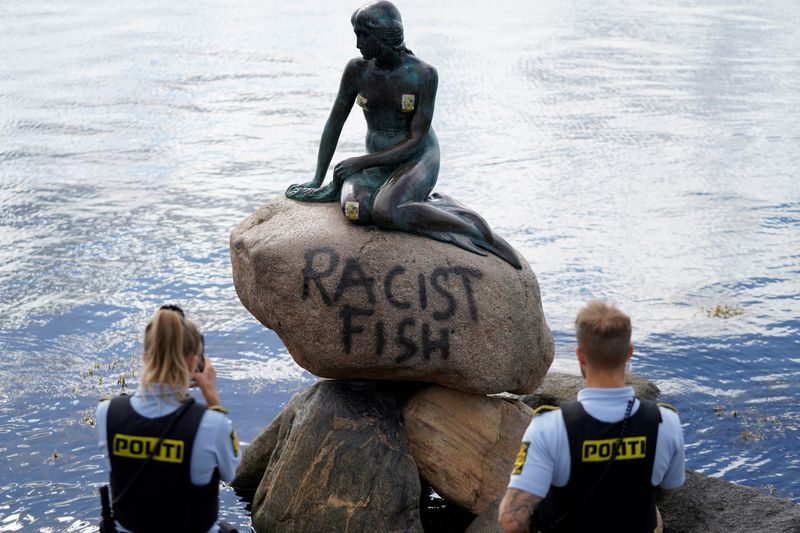 Many statues and monuments around the world have been defaced this year, including the famed statue of The Little Mermaid in Copenhagen most recently by supporters of “Black Lives Matter” movement.

The he Little Mermaid is a bronze creation of Hans Christian Andersen’s famous character which is one of the city’s biggest tourist draws. Reportedly, yesterday it was tagged with the words “racist fish” in black spray paint.

1.65-metre statue sits at the entrance of the Copenhagen harbour and was created to honour the Danish storyteller, who wrote of the popular deep-sea mermaid longing for legs to live among humans, with the prince she falls in love with.

No one has taken responsibility for vandalism yet, and it isn’t the first time the monument has been a target. In the 107-year history of the statue, it has been beheaded and painted over more than once.

Monuments of historical figures who played a role in colonization and racial oppression have become latest targets as the Black Lives Matter movement has gained momentum across the world.

In June, the statue of Confederate General Robert E. Lee was removed from Richmond. Protesters removed the head of six-foot-tall Christopher Columbus in Boston’s North End the same month, per the Boston Globe. On June 9, a bronze topper honouring the Jacksonville Light Infantry, a division in the Confederacy, was removed unlawfully, WTXL-TV reported.

Other states in the US, from Georgia to Indiana to Kentucky, have been removing of statues remembering Confederate soldiers and colonizers to take them away from the public eye.