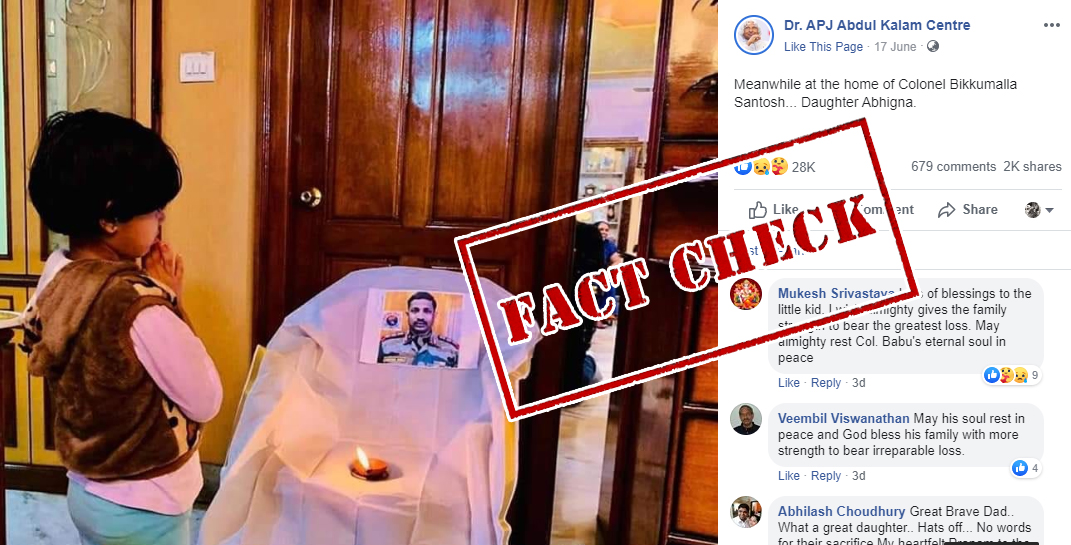 A picture of a small girl standing in front of a photograph of Colonel Santosh Babu is doing the rounds on social media.

Claims are being made that she is the daughter of Colonel Santosh Babu, who lost his life at Galwan Valley in Ladakh. He was the Commanding Officer of 16 Bihar Regiment.

“Meanwhile at the home of COLONEL SANTOSH BABU 16 BIHAR daughter Abhigna, I am speechless with just tears in my eyes. ” the caption read.

A simple Reverse Image Search led us to a tweet by the official Twitter handle of ABVP Karnataka.

“Lets pay our homage to Col Santosh Babu, Commanding Officer of 16 Bihar Regiment martyred today in retaliation with china. Tributes by lighting the lamp for the martyred soul by Bengaluru Rural Vibhag, ” the tweet read.

In another tweet, ABVP clarified that the girl in the picture is the sister of one of their members and not the daughter of Col Santosh Babu.

We noticed some personalities & prominent handles have mistakenly, without any ill-will reported the girl to be daughter of martyr Col Santhosh Babu.

We understand their sentiments, but deem it necessary to clarify that the girl is younger sister of an @ABVPKarnataka karyakarta. pic.twitter.com/3Zgt5M9TNK

Hence, from the above information, we can conclude that the post in question is false.