Home IJourno A walk to remember 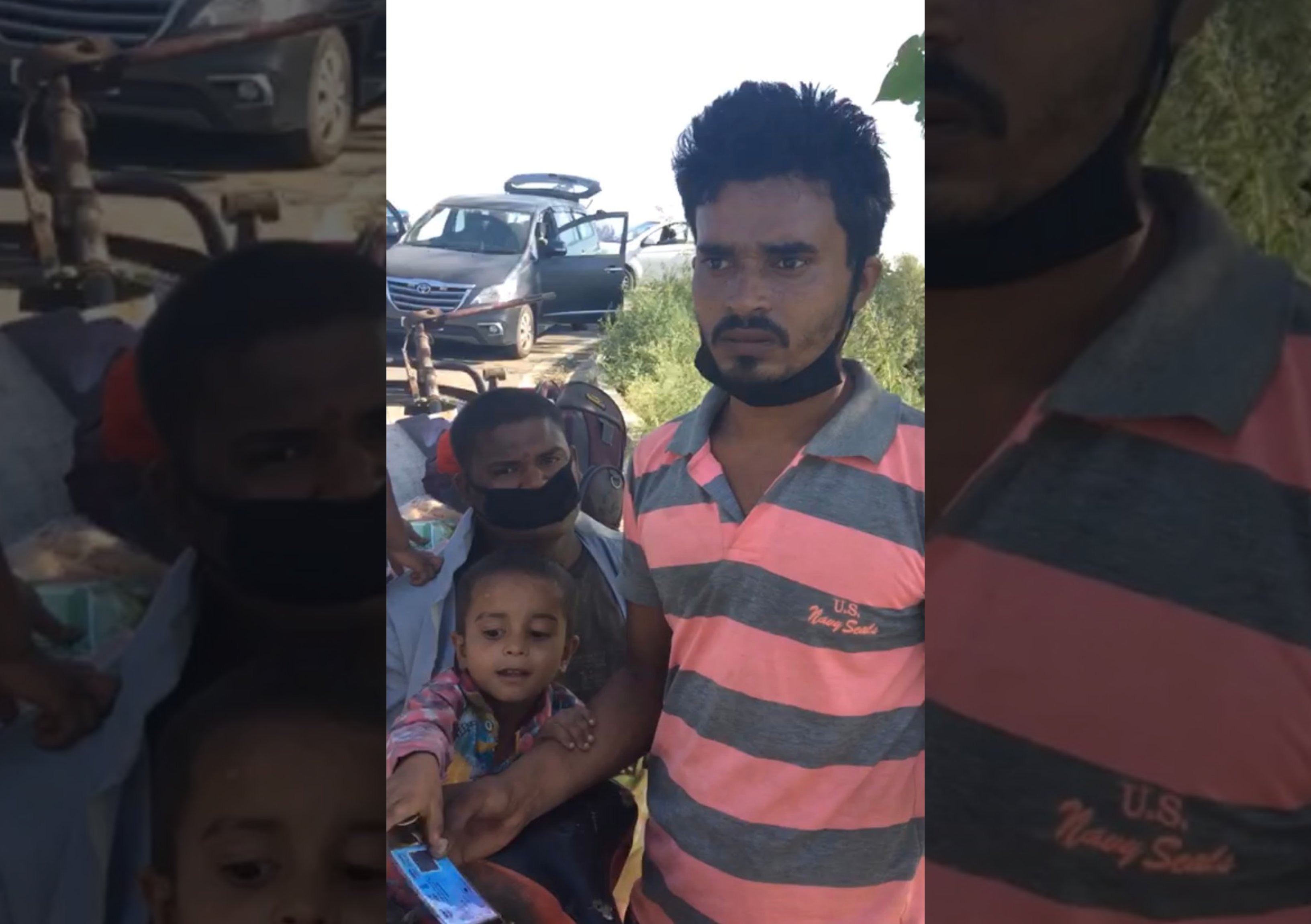 “The world is going to come to an end. I want to die where I was born,” said a migrant labour I met on the National Highway 24. The world did come to an end for Amid when his wife Anura died on May 10, 2020, leaving him with his two girls Amiran and Aminul aged 3 and 4 years. A father in mourning packed his belongings and his girls on his rickshaw and left for his sister’s house over a thousand kilometres away. His brother Sadamal, a paraplegic, sat holding the children with his only hand; his handicap cycle was tied to the rickshaw along with their bare minimum belongings in cloth bundles.

While Amid was narrating his story, my eyes caught his little daughter’s, who smiled as I handed her a Frooti. She was suddenly distracted by her mother’s identity card Amid was showing me. She took it from his hand and sat looking at it. My camera captured her solemn look with the remains of a smile. Suddenly, my perception of the world changed.

I was one of the privileged ones who had headed to my hometown before the ‘Janta Curfew’ leaving my ‘normal’ life behind. My brother who came home after two months, witnessed the endless lines of migrant workers loaded with the physical remnants of their world on their shoulders, sneaking past barricades towards their homes.

But why the roads, I wondered when they are supposed to get free rides and food from the state governments. As we met and spoke to the people on the road, our social media inspired world view altered completely and more stories tumbled out. This is largest migration since the partition and a handful of disorganised individuals can never be enough.

Uttam Mandal, along with his brother Chetan and their wives Lalita and Shubha started from Delhi on his lorry-cycle towards West Bengal. Facing abomination from the upper classes and depleting cash, they bid goodbye to the town that had given them promises of a new life as brick layers in the booming construction contract labour trade. They could not abandon the lorry that once helped them earn a living and no buses or trains would accommodate their load. The reality is that all relief efforts are aimed at the shelters inside districts and the people on the highways are neglected, often dying of starvation and dehydration.

The Shramik trains arranged for them by the central and state government had promised to provide them wheels. I happened to meet a few who were not allowed to board the train even after owning a ticket. Hence, such promises were nothing but news to their ear to lift their morale for a moment and dropped in a second.

Though a crowd funding drive we decided to collect a substantial amount to help the migrant workers on the highway. Our effort is structured at a base donation of INR 500 per donor, the price of an average metropolitan unisex haircut. We spotted a check point on National Highway 24 where around 20 policemen were deployed. They only need was to seek help from the policemen to channelize their authority to stop empty trucks going to similar places for the ones passing by on foot failing which we decided to hand the labours on foot with money to reach their destination.

While providing aid to the migrants I stumbled upon a group of 5 farm workers hailing from Ludhiana. Travelling on their feet, they found themselves in a Bolero pickup truck only to be thrown out by the driver a couple of hours later after taking INR 2 thousand from each of them. Helpless they struggled along till the border where our relief effort is stationed. We helped them onto a transport, feeding them and funding their journey to Patna, a destination they hoped to take on foot after being cheated.

Having funded around 180 railway tickets, countless meals along with funding of road transport for such workers, we are in constant need of funds. We met most of them during the end of their journey and some who were about to give up on an empty highway.

In the coming time, the experience faced by these migrant labours will be shared as a story to the future generation. Meanwhile, for the ones watching them as headlines on the news channels it will be nothing but a vivid memory that will no more be discussed in future. Well for me, I acquired knowledge by learning numerous stories from different walks of life, by realising gratitude towards our life, by learning the ability to look at life from a whole new perspective and finally everything made sense.

(The author is an advocate and the views expressed are personal)