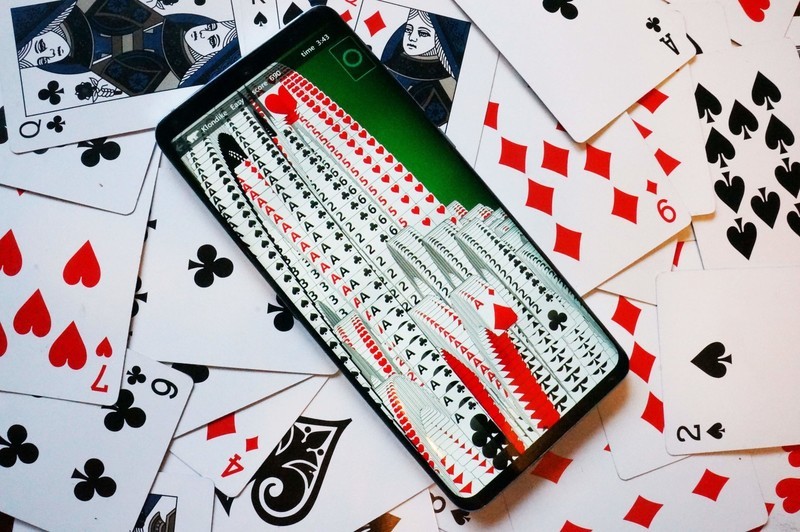 Card games are the ultimate form of entertainment for generations, and now, thanks to the mobile technology we play them on our smartphones. The card games have been around since the 9th century, as the first card game was created in China during the Tang dynasty. However, first card games have little to no resemblance to modern-day Android card games.

The Android card games like we know it usually fall under three categories:

And while this is all nice and dandy, the main question is: what games are the best ones for Android users? We created a summary for every game we recommend so you know what’s it all about. 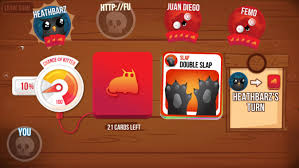 This popular card game was released for Android in April 2016, and is a highly-strategic version of Russian roulette, but with cute kittens. Created by Elan Lee, Matthew Inman and Shane Small, Exploding Kittens is one of the most successful crowdfunding in the history of Kickstarter.

Exploding Kittens require 2 to 5 players, and you can connect with your friends or play with strangers. All players draw cards until someone draws the Exploding kitten. Once the kitten explodes, the round is over and everyone is dead unless someone uses the Defuse card to prevent the explosion. The mobile version of this popular game offers some mobile-exclusive cards, as well as expansion packs. Till 2020, there have been two expansion packs. The first one had two additional cards and the second three new cards. 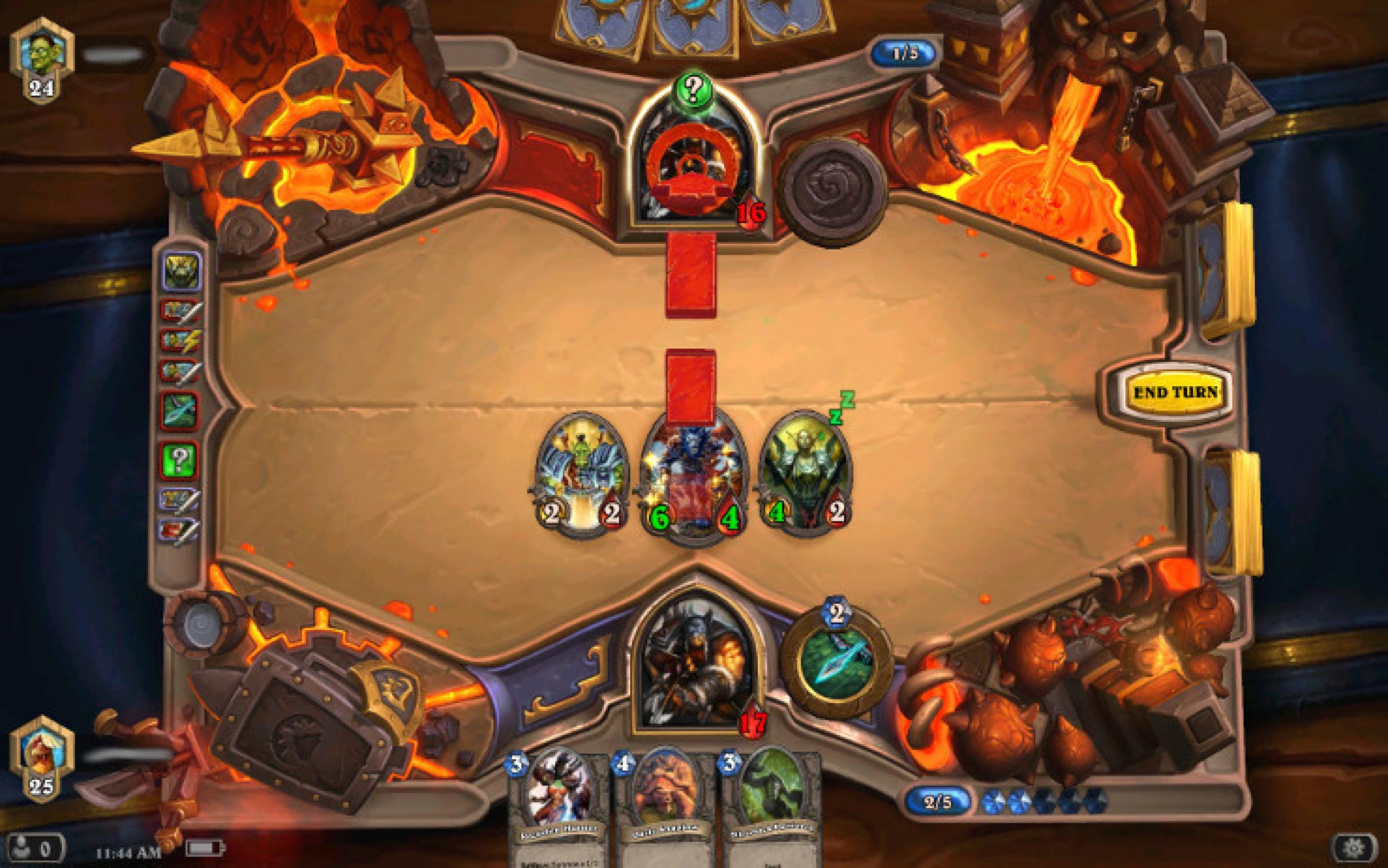 What started as an experiment in Blizzard Entertainment, is now one of the most played Android card games and a popular eSport. Hearthstone is set in the Warcraft universe full of warlocks, trolls, gnomes, and other mythical and fantasy creatures with special skills and roles.

Each player builds his own deck of fantasy-themed cards, depending on their playing style. For example, one can focus exclusively on magical creatures or different spells. Every card can be either a minion, a spell, a weapon or a hero. Players take turns and play cards from their hand, but every card will cost them mana. This fast-paced strategy game is still going strong 5 years after the initial release thanks to many expansions and adventures added several times a year.

You have probably encountered scratch cards on gas station checkouts, but now you can play them on your Android as well. Scratch cards are basically small cards with a special layer of paint that hides fun characters or numbers. After you scratch the paint, you find out whether your card is the winning one! Online scratch card games follow the same premise, but instead of scratching with a coin, you simply move your finger on the screen.

Scratch Off has over 30 different card designs, and some of them even combine scratch cards with crosswords.

Pokemon enthusiasts could barely wait for the Android version of this popular card collecting game. The Pokemon TCG Online game saw the light of the day in 2016, 20 years after the initial release of the Pokemon franchise, and relies heavily on the heritage of the original.

Every player has a deck consisting of 60 cards. They can use them to challenge other players or game characters. Besides the Trainer mode where you play against the computer, there is also Standard mode (you play with cards that are in the current rotation), Theme mode (you play with a themed-deck) and Expanded mode (you can use cards in expanded rotation). All Pokemons are divided into categories, depending on their element: grass, lightning, darkness, fairy, fire, psychic, metal, dragon, water, fighting or colorless. 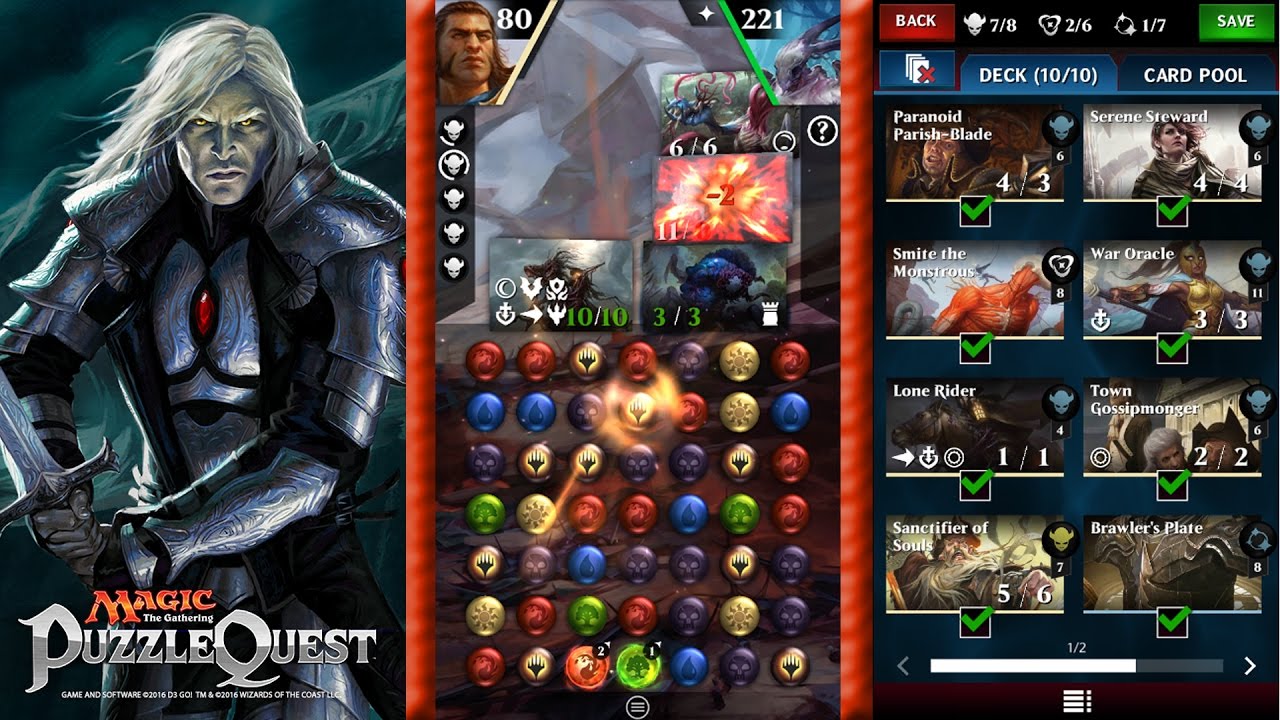 This is another game that was created based on an already existing TCG and RPG. The original Magic: The Gathering was released in 1993, but the Android app was released over 20 years later and immediately became a huge hit with 2.5 million players from all over the world.

Magic: The Gathering Puzzle Quest offers everything the original does but in the mobile environment. The main goal of each player is to create a powerful deck of cards, build a strategy and fight the opponents. You can win cards by playing the classic match-3 games. The game also includes special events, booster packs, and boss battles. Also, you can join a Coalition and team up with other players or simply play against them in special tournaments. 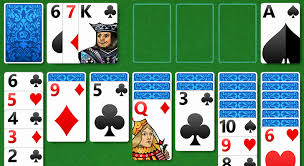 Solitaire is one of the first computer games many of us encountered in the early ’90s. Microsoft Solitaire Collection offers five variations of solitaire completely free of charge. You can play Klondike Solitaire, Spider Solitaire, Free-Cell Solitaire, Tri Peaks Solitaire, and Pyramid Solitaire.

The fun doesn’t end there, as every day you can join a daily challenge to win badges and great rewards. If you sign in with your Microsoft account, you will be able to play on different devices, as long as they support Android or Windows 10, and your progress and results will be saved in the cloud. 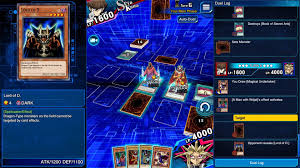 Yu-Gi-Oh! Duel Links was released in 2017, and immediately became a huge hit in the Yu-Gi-Oh! community. As the name suggests, players duel each other to win new cards and level up. Players can be either be a Standard Duelist or a Legendary Duelist. You can also do special missions to unlock additional features, play with your real friends, revisit some duels and try practice play. During the game, you will encounter numerous popular characters from all Yu-Gi-Oh! timelines, as the game is not set in a certain timeline, but it seems it takes place after Battle City. 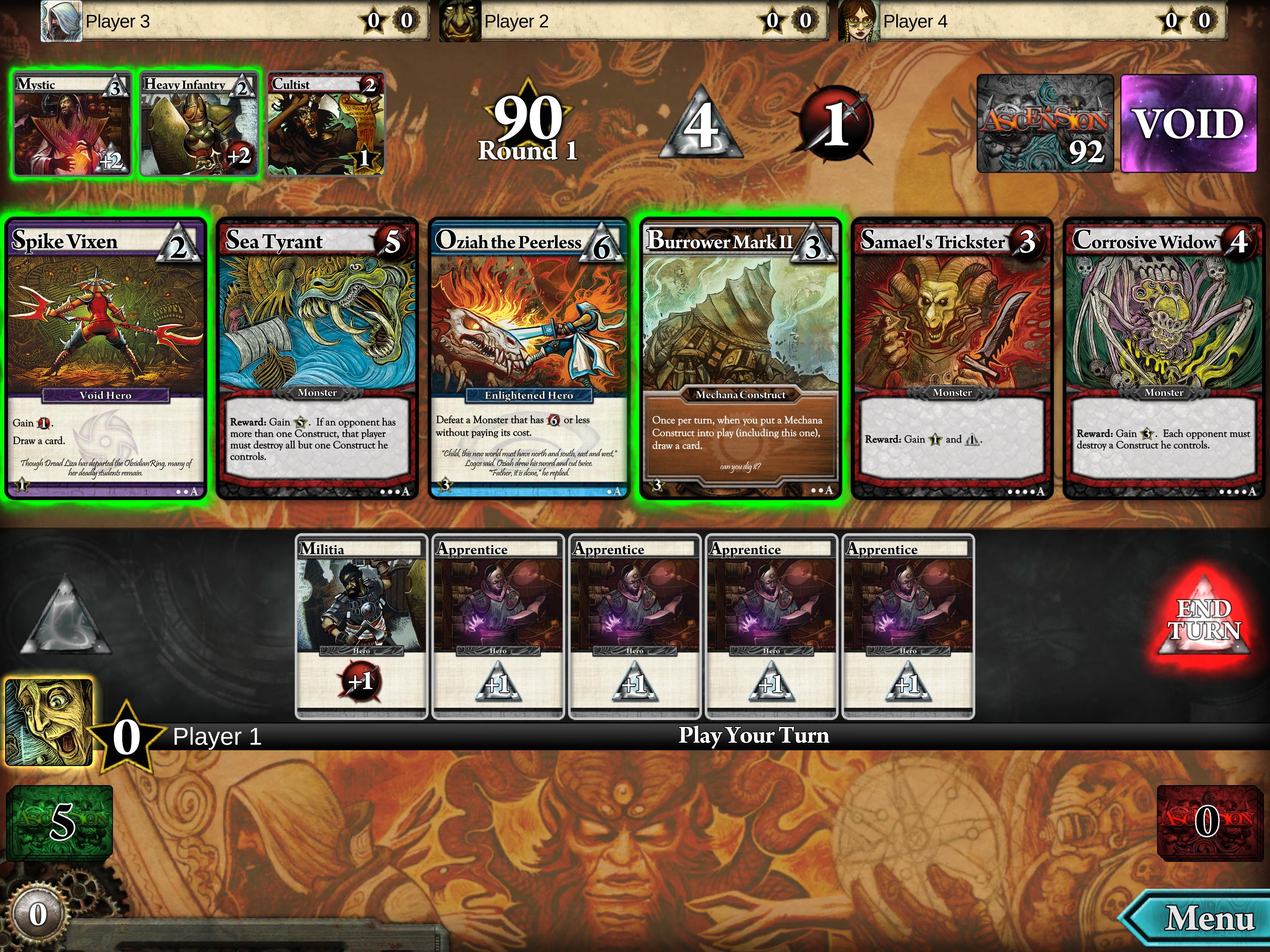 Ascension is another game based on deck games, and to play it on Android, you will need an internet connection, Playdek account and to be over 13 years old. What makes this game stand out are the expansion packs that will keep you interested for a long time. Since the initial release in 2011, there have been 10 impressive expansions, and each of them introduced a new adventure. Set in a fantasy world, it follows heroes, soldiers, mystics, monks, and assassins who fight against demons. Every player starts with a small deck of cards, that can be improved and expanded by using Runes and Power. 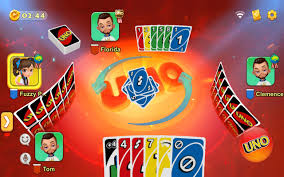 What is the best way to turn your friends into enemies? Uno! The colorful card game developed in 1971 is as popular as ever thanks to the Uno Android app that takes the game to a whole new level. For example, you can team up with your friend and develop a strategy to crush the opponent team, create a house with your own rules, join competitions and challenges, play in different modes, and explore the unique UNO universe. The basic deck of cards is the same, but new ways of playing make it more interesting. 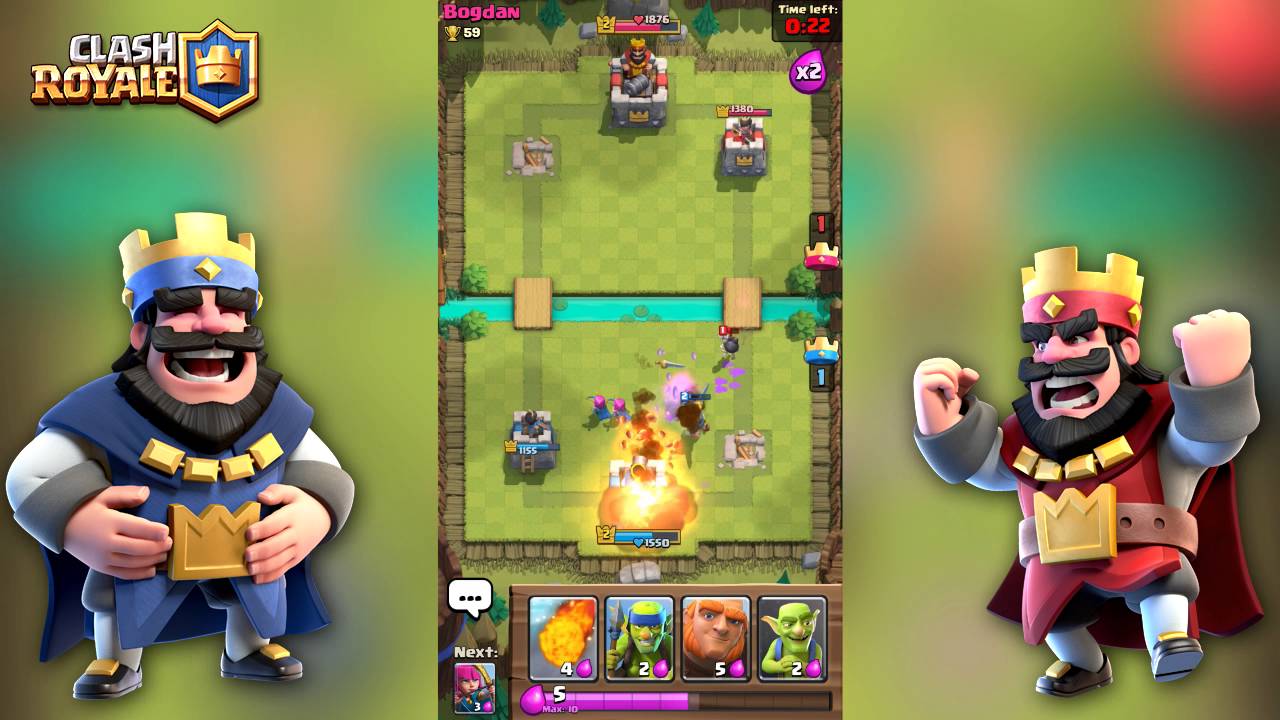 Developed by the same company as Clash of Clans, Clash Royale is a mobile card collecting game with kings, troops, princesses and dragons. You can form clans and take down the common enemy together, or play solo. Rewards, challenges, competitions and special events make this card game fun and exciting. Clash Royale offers plenty of playing opportunities as you can challenge your Clanmates, build a special Battle Deck, upgrade your defenses, destroy your opponent’s efforts, and learn about strategies on a special TV channel. You will win awards, trophies and build your reputation in the Arena! The game is not available for those under 13 years of age.