Home Home Slider Bengaluru: Digvijaya Singh in preventive custody for sit-in protest after not being... 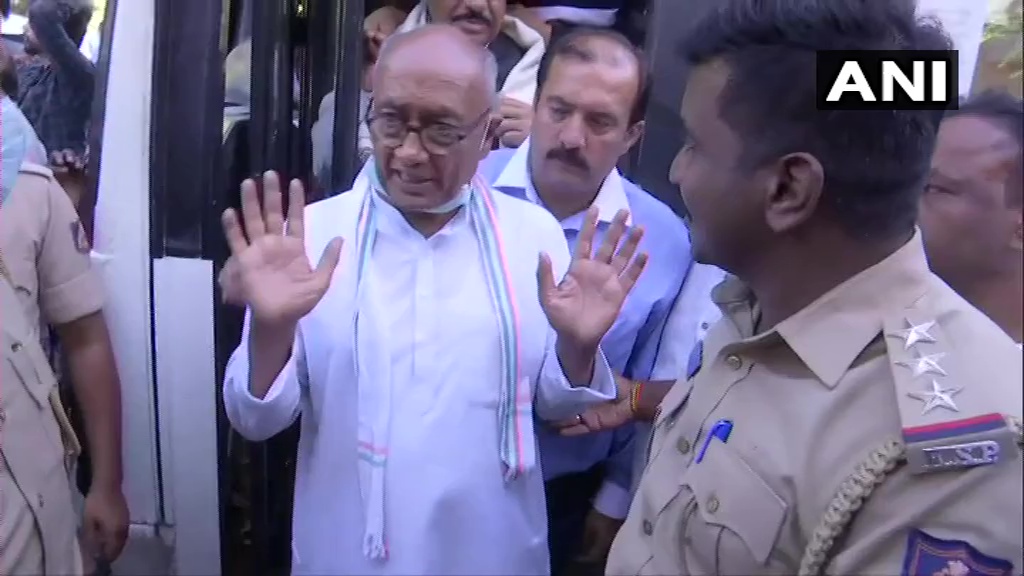 Former Madhya Pradesh chief minister and Congress leader Digvijaya Singh who landed in Bengaluru early Wednesday is now under preventive arrest after he sat on a ‘dharna’ near Ramada Hotel in Bengaluru allegedly for not being allowed by police to meet the 21 rebel Congress MLAs lodged in the hotel.

“I am a Rajya Sabha candidate from Madhya Pradesh, voting is scheduled for March 26. My MLAs have been kept here, they want to speak to me, their phones have been snatched, the police is not letting me speak to them saying there is a security threat to MLAs,” Singh told reporters. Singh was received at the airport by Congress state president DK Shivakumar.

Singh who sat on the dharna with a face mask on said: “We were expecting them to come back, but when we saw they’re being held back, messages came from their families…I personally spoke to five MLAs, they said they’re captive, phones snatched away, there is Police in front of every room. They’re being followed 24/7,” Singh said.

ALSO READ: Unimaginable pain for people in next six months: Rahul Gandhi on…

The development comes amid the political crisis in Madhya Pradesh which followed the exit of Jyotiraditya Scindia from the Congress party.

Scindia’s exit was followed by 22 Congress MLAs resigning from the party as well as from the state legislative Assembly.

The resignation of these many MLAs has left the Kamal Nath government below the majority mark.

On the other hand, Digvijaya Singh had also filed an objection to the nomination filed by Jyotiraditya Scindia and Sumer Singh for the Rajya Sabha elections, which was rejected by the Returning Officer, according to the state BJP leadership.
Meanwhile, today the Supreme Court is slated to hear the petition filed by former Madhya Pradesh Chief Minister Shivraj Singh Chouhan and others seeking a floor test in the Madhya Pradesh Assembly.

On Tuesday, the top court while hearing the petition, had issued notices to Madhya Pradesh Chief Minister Kamal Nath and Assembly Speaker NP Prajapati among others.
A division bench headed by Justice DY Chandrachud and also comprising Justice Hemant Gupta had issued notice to the Chief Minister, Speaker, principal secretary of Assembly, state of Madhya Pradesh and Governor and slated the matter for further hearing on Wednesday.

While appearing for the BJP leaders, senior advocate Mukul Rohatgi said that the floor test is required in the matter. The petition sought a floor test in the Madhya Pradesh Assembly in the wake of 22 Congress MLAs resigning from the party as well as from the state legislative Assembly.