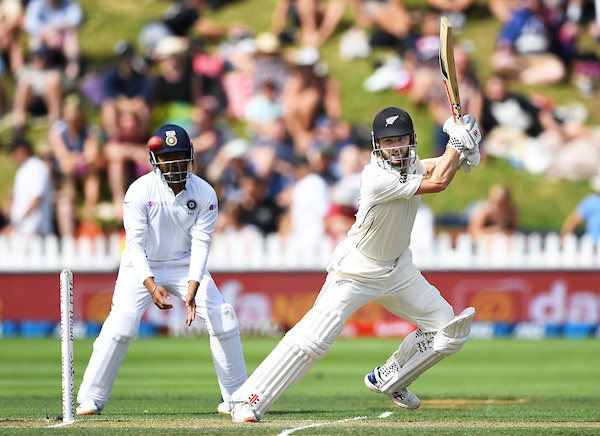 Kane Williamson’s knock of 89 runs allowed New Zealand to take a lead of 51 runs over India on day two of the ongoing first Test here at the Basin Reserve in Wellington.

New Zealand openers Tom Latham and Tom Blundell saw off the first ten overs and managed to move the scoreboard slowly and steadily. India finally got the breakthrough in the 11th over as Ishant Sharma dismissed Latham (11).

Skipper Kane Williamson next came in to bat, and he along with Blundell managed to stitch together a partnership of 47 runs. But with the back against the walls, Ishant once again stepped up for India to send Blundell (30) back to the pavilion, reducing Kiwis to 73/2.

Ross Taylor, who is playing his 100th Test, came out next to join Williamson in the middle. Kiwis went into the tea interval at a score of 116/2.

Both Taylor and Williamson put on a 93-run stand and allowed the Kiwis to take lead over India. Taylor (44) perished in the 53rd over as Ishant had him caught at short-leg.

New Zealand managed to keep the scoreboard moving and Williamson looked set to bring up his century. However, Mohammed Shami had other plans as he went on to send Williamson (89) back to the pavilion in the 63rd over, reducing Kiwis to 185/4.

Soon after, Ravichandran Ashwin also got among the wickets as he dismissed Henry Nicholls (17) in the 70th over. BJ Watling and Colin de Grandhomme ensured that the Kiwis do not lose any more wickets before the close of play on day two.

Resuming day two at 122/5, India lost their overnight batter Rishabh Pant (19) early as a horrible mix-up between the wickets, ended up in him getting run-out. Immediately after Ravichandran Ashwin (0) was dismissed by Tim Southee, reducing India to 132/7.

Set batter Ajinkya Rahane (46) also perished at the hands of Southee and India was bowled out for just 165.