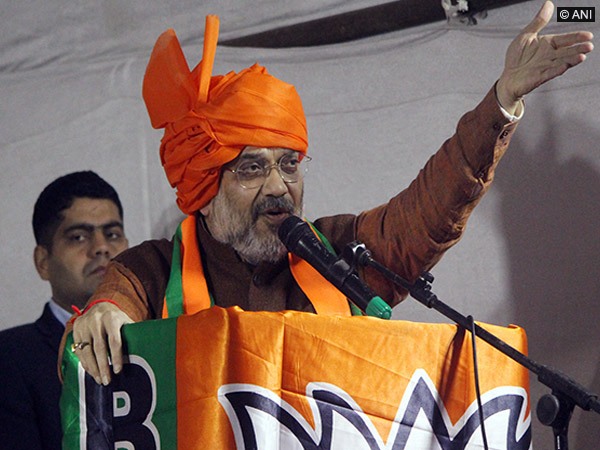 Home Minister Amit Shah on Thursday accused Congress and opposition parties such as AAP of provoking the youth and minority community to cause “riots” in the national capital during protests against the Citizenship Amendment Act (CAA) and said Rahul Gandhi and Arvind Kejriwal had spoken in favour of those who had raised anti-India slogans on the JNU campus two years ago.

Addressing an election rally at Matiala here to start BJP’s campaign for Delhi assembly elections, Shah took repeated digs at the Delhi Chief Minister and said if the competition to make false promises is held in the country, “Kejriwal will definitely come first”.

He alleged the people in the national capital were getting “the worst quality of water” in the country and alleged that AAP government has not implemented Ayushman Bharat Scheme so that the poor do not vote for Prime Minister Narendra Modi.

He said the AAP and its leader have not won any election in the last five years after winning the Delhi polls.

ALSO READ: We will drag Kamal Nath by his collar if he addresses…

He urged the people to give Prime Minister Modi a chance to transform Delhi into a front-ranking world capital city and talked of the surgical strike in PoK and aerial strikes in Balakot in Pakistan on terror targets as also of revocation of Article 370 in Jammu and Kashmir. He also referred to the Supreme Court verdict in the Ayodhya case.

Referring to the CAA, Shah accused Congress leader Rahul and Kejriwal of creating obstacles in refugees from Pakistan, Afghanistan and Bangladesh getting Indian citizenship.

“Should refugees who have come from Pakistan, Afghanistan and Bangladesh get Indian citizenship or not. They have faced atrocities. Where should they go? We talked of giving them citizenship but Kejriwal and Rahul Gandhi are creating obstacles,” he said.

Shah said AAP leader and Delhi Deputy Chief Minister Manish Sisodia has said that they are with those protesting at Shaheen Bagh against the CAA.

“These people started provoking the youth, minorities and caused riots in Delhi. Did you see or not. Today also Delhi Deputy Chief Minister Manish Sisodia says unashamedly that they are with those protesting at Shaheen Bagh,” Shah said.

He said slogans that ‘India gets divided into 100 parts’ were raised at JNU two years back.

“Modiji put them (those responsible) into jail but Kejriwal and Rahul and company immediately reached there and started saying these people have right to free speech,” he said.

He said Narendra Modi has taken the country forward, has enhanced India’s image abroad and “hit the enemies of the country in their house.”

The BJP leader accused Kejriwal of not fulfilling promises made to the people and said he had not implemented the legislation concerning the Lokpal.

“I’ve come to remind Kejriwalji that you forgot the promises you made but neither the people of Delhi nor workers of BJP have forgotten. You became CM with the help of Anna Hazare but couldn’t bring a law for the Lokpal and when Modiji brought it, you didn’t implement it here,” he said.

Taking a dig at AAP over its poll slogan “Lage Raho Kejriwal (Keep working Kejriwal), he said: “For 4.5 years Kejriwalji kept saying that Modiji didn’t let him work. So development work could not be done in Delhi. Now he says that he developed Delhi in 5 years so ‘Lage Raho Kejriwal.”

He said that voters have to decide if they want a government, which works like Modiji or one that resorts to agitations.

Shah said people and BJP workers have not forgotten the promises made by Kejriwal and he had promised to construct 1,000 schools and 20 colleges, install 15 lakh CCTV cameras, get 5,000 buses, provide wi-fi but none of them has been fulfilled.

He said the AAP talked of giving jobs to eight lakh people but ad hoc employees have not been regularised.

“You said you will make the Yamuna clean but not to talk of cleaning the river, you have even made the water that comes to our houses unclean. Today residents of Delhi are getting the worst quality of water in the country. You are not capable of cleaning the Yamuna. Modiji and Yogiji (Yogi Adityanath) are working to clean Ganga. They will also clean the Yamuna,” Shah said.

He said Kejriwal had talked of building flyovers but alleged that the AAP government had created roadblocks to works being done by the Modi government.

He accused Kejriwal of creating roadblocks in the task of regularising unauthorized colonies in Delhi and said Modiji had provided people in 1,731 illegal colonies property rights in about Rs 5,000.

Shah said the poor in Delhi were not getting free treatment of Rs 5 lakh under the Ayushman Bharat.

“The way Modiji regularised unauthorised colonies, in the same way, the BJP will provide two-room flat at all places where jhuggis exist,” he said.

Shah accused the Kejriwal government of implementing the urban housing scheme of the Modi government.

“There are 112 such schemes in which Kejriwal is an obstacle. Once this obstacle is removed, the schemes will reach the people of Delhi,” he said.

Shah said Modi promised to provide water to all people by 2024 and days later Kejriwal made a similar promise for the people in Delhi. “Is Delhi not in the country,” he asked.

Shah said the Modi government will work to provide mineral-quality piped water to the people.