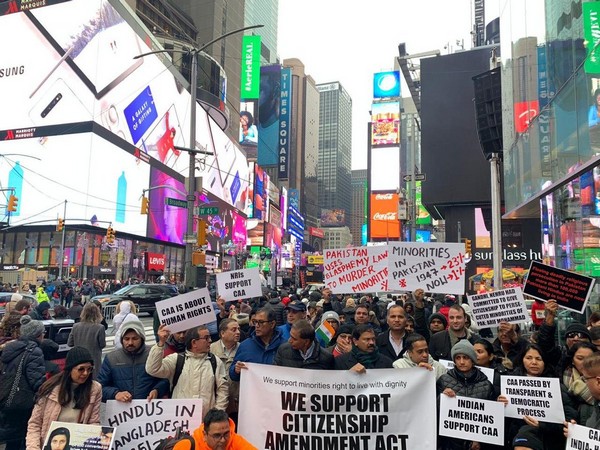 People of Indian-origin on Sunday (local time) held a march at Times Square in support of the Citizenship (Amendment) Act, which was enacted on December 12.

Since the last few days, members of Indian diaspora are holding demonstrations in various cities of the US including Austin, Raleigh, and Seattle.

The Citizenship (Amendment) Bill was passed by the Indian Parliament earlier this month and became an Act with Presidential assent on December 12.

The legislation provides Indian citizenship to non-Muslim refugees of Pakistan, Bangladesh, and Afghanistan, who arrived in India on or before December 31, 2014.

Since the enactment of the CAA, protests have erupted in various parts of India including its national capital.

The rallies by NRIs are being organised to dispel the misinformation and myths surrounding the act as well as to counter the planned deliberate propaganda of hate, lies and downright absurdities spread by US-based Pakistanis.