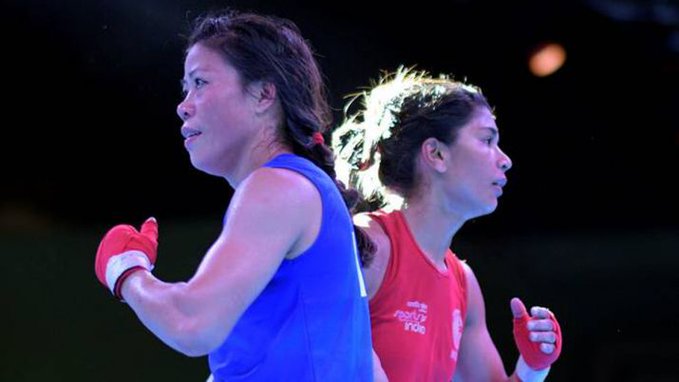 Mary Kom defeated Nikhat Zareen on Saturday in the finals of the ongoing Women’s Boxing Olympic trails in the 51-kg weight category here at the Indira Gandhi Stadium.

The six-time world champion defeated Zareen 9-1 in the much-talked-about bout.

ALSO READ: Mark these dates for major sporting events in 2020

The trials for the women boxers are underway and will conclude today while the men’s trials will take place from December 29 to 30.

Mary Kom, when asked why she did not shake hands with Nikhat Zareen after the bout, said, “Why should I shake hands with her? If she want others to respect her then she should first respect others. I don’t like people with such nature. Just prove your point inside the ring, not outside.”

Speaking to the media, Nikhat Zareen said, “I did not like how she (Mary Kom) behaved with me, because when the decision was announced and I tried to hug her, she did not hug me back. Being a junior I expect from seniors that they respect juniors too, so I felt hurt.”

Earlier, Zareen had demanded a ‘fair chance’ to contest the Tokyo Olympic qualifiers. On October 17, Zareen had written to the Sports Ministry challenging the Boxing Federation of India’s (BFI) decision to accommodate world champion Kom by changing its rule of exempting gold and silver medallists from the World Cup.

Kom had won a bronze in the 51kg semi-final at the Women’s World Boxing Championships in Ulan-Ude in Russia losing out to Busenaz Cakiroglu of Turkey on October 12 this year.