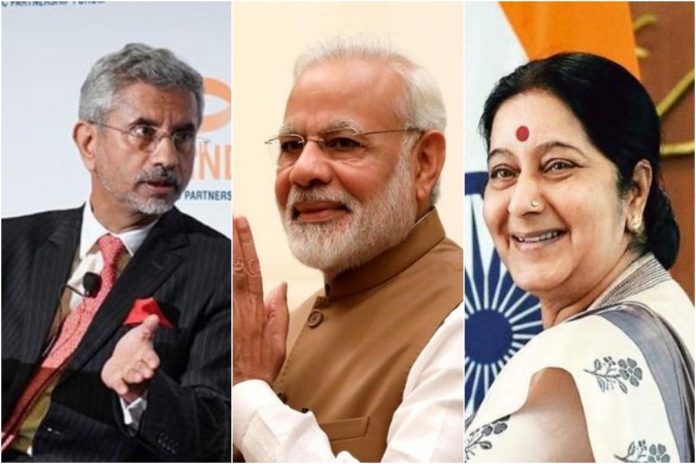 2019 has been a busy year for the Indian foreign policy establishment. Foreign policies of a nation have to be dynamic, factoring in changes that a fast-paced world undergoes. India has managed to improve its relations with a few nations, opened up new frontiers and is continuing to deal with new challenges. Here are some of the top 10 Diplomatic moments of India in 2019.

In February, Pakistan supported terror group Jaish-E-Mohammad attacked a convoy of CRPF personnel in Jammu and Kashmir, martyring more than 40 Jawans. This has been the worst terror attack India has seen in recent times.

A strong response was expected from India. The Indian Air Force attacked two targets in Pakistan Occupied Kashmir (POK) and Balakot in the Khyber- Pakhtunkhwa province of Pakistan.

The international community which was worried about the fall out of these attacks was reassured. Pro-active Indian Diplomacy, once again won. The diplomatic personnel worked to ensure that India did not face any adverse situations and embarrassment before the global community.

This generated much international attention on the issue and it was expected that India would suffer a loss of credibility. However, the Ministry of External Affairs had a diplomatic strategy in place. The Indian government briefed the envoys of different nations in Delhi and went on to also explain its position in the various world capitals.

The event was held on 22nd September at the NRG stadium in Houston, Texas. The event was hosted by the Indian community in Texas. More than 50,000 Indians and others attended the event, where Prime Minister Narendra Modi addressed the members of the community.

US President Donald Trump along with other members of the US Congress were present. The Indo-US relations gained momentum after this and is expected to continue on the upward trajectory, as 2020 approaches.

The two sides reaffirmed their firm commitment to uphold the strategic relations that exists, during the recently concluded 2+2 Ministerial dialogue at Washington DC. India has also got a waiver from the sanctions and has been permitted to go ahead with the Chabahar project, keeping in mind the situation in Afghanistan.

In September, Prime Minister Narendra Modi was invited as a chief guest to attend the Eastern Economic Forum meeting at Vladivostok in Russia. He also chaired the Indo-Russia annual summit dialogue.

The ties that were struck in policy paralysis and third nation meddling, saw ties improve and economic relations experiencing an up-swing. The ‘state connect’ between the Indian states and Russian provinces was established. This is expected to increase people to people ties, quantum of economic goods and services traded and invested amongst other things.

The second informal dialogue between India and China was held in the month of October near Chennai. Prime Minister Narendra Modi hosted the Chinese President Xi Jinping. No major agreements were signed, however, differences in the relations were narrowed down.

The two countries agreed to establish a separate committee to look into the issue of trade deficit that India is currently experiencing with respect to China. Another outcome was related to the holding of the talks between the Special Representatives of both the nations to discuss the issue of border differences.

There were apprehensions regarding the future of ties between the two nations. Indo-Sri Lankan ties under former President Mahinda Rajapaksa before 2015, wasn’t exactly cordial.

The meeting with Prime Minister Narendra Modi yielded positive results. The relations are only expected to grow further from now onwards.

The Prime Minister of Bangladesh Sheikh Hasina too visited India and the ties between the two nations have entered the golden period, as described by PM Narendra Modi.

The defining action of 2019, as far as the neighbourhood is concerned has been the fact that the tensions with Maldives has been eliminated completely. The relations are strategic in nature and India’s concerns related to its security is being addressed.

7. Equations in the Middle East

The friendship between India and these nations has translated into better economic prospects for India and Indians.

In November, it was highly anticipated that India would become a part of the RCEP. However, India pulled out in the last moment, when its concerns related to Chinese mercantile aggression and the services sector concerns amongst others were blatantly ignored. The agriculture sector too had concerns.

The Ministry of External Affairs explained that nations seemed to have ganged up against India, and it wasn’t in the interest of the nation to sign the deal in the current form.

Keeping up with the high- level contacts with the European nations, the External Affairs Minister visited Sweden, Finland, France and Serbia. The President of India visited Switzerland and Iceland. Other dignitaries too have visited other nations.

Matters related to climate change, sustainable development and social justice will continuing being top priorities of the two sides.

India’s relations with France is at an all time high. The defence and economic partnerships have increased. India is in the process of inducting the Rafael aircrafts of France into the Indian Air Force.

In December 2019, the Indian parliament has amended provisions related to the Indian Citizenship Act, thereby granting citizenship to members of the Hindu, Christian, Sikh, Buddhist, Jain and Zoroastrian communities from Afghanistan, Bangladesh and Pakistan.

Certain members of the international community raised concerns regarding the fact that Muslims are being left out. Also, suffering from lack of exact knowledge, certain organizations indulged in creating mass hysteria and even alleged that Muslims living in India will be asked to leave.

The government of India continues to patiently deal with these concerns and it appears to be a diplomatic success till date.