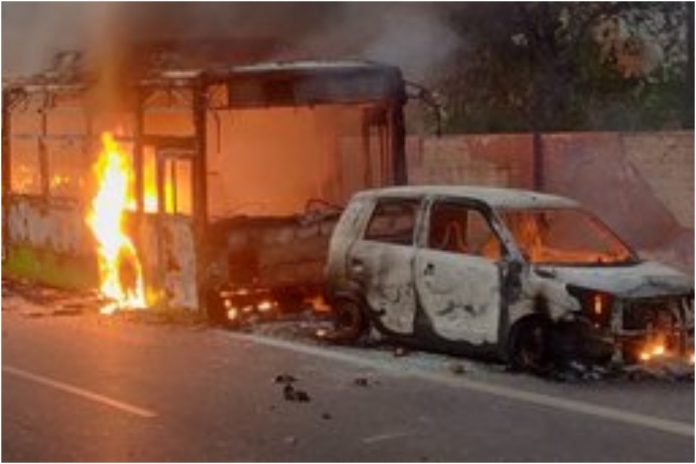 Many people gathered outside the old Delhi Police Headquarters to protest the force’s handling of the situation after an agitation against the new citizenship law near Jamia university on Sunday turned violent.

The protesters raised anti-police slogans outside the headquarters in ITO area, after a call for it was given by the Jawaharlal Nehru University Students Union. Other students’ bodies endorsed the protest call.

Earlier Sunday, protestors torched several vehicles near Jamia university and clashed with police. After the clash between protesters and police, at least 35 injured people were taken to a nearby hospital, news agency PTI quoted its sources as saying.

WE ARE INDIANS FIRST AND ONLY AN UNDIVIDED AND UNITED INDIA CAN PROGRESS NOT A DIVIDED INDIA.

Pardon my saying so but
Modi Shah combine are dividing us for their own Political Ends. Please wake up before it is too late. To some extent we are already late.

Entry & exit gates of Model Town are closed. Trains will not be halting at these stations.

Entry and exit gates at over 15 metro stations were shut by the Delhi Metro Rail Corporation (DMRC) today as a precautionary measure amid protests over the citizenship law.

According to the DMRC, entry and exit gates of 15 metro stations were closed and the corporation put out information about trains not halting at these stations.

The decision was taken on the advice of the Delhi Police, said the DMRC.

“As advised by Delhi Police, entry and exit gates of Sukhdev Vihar and gate no. 3 of Ashram have been closed. Trains will not be halting at Sukhdev Vihar,” DMRC said in a Twitter post.

#Delhi: Police and protesters outside the campus of #JamiaMilliaIslamia University; tear gas shells fired at protesters by the police. pic.twitter.com/g0qsMG6POR

No one shud indulge in violence. Any kind of violence is unacceptable. Protests shud remain peaceful. https://t.co/CUiaGLb9YY

Owing to the ongoing situation in and around Jamia Milia Islamia University, the Delhi Metro said it has decided to prevent halting of trains at stations that arein close proximity to the university like Sukhdev Vihar, Jamia Millia Islamia, Okhla Vihar and Jasola Vihar.

Meanwhile, the Jamia Teachers Association has appealed to students to keep away from “direction-less” protest led by local political leaders.

A group of Jamia students have also issued a statement saying, we have time and again maintained that our protests are peaceful and non-violent.