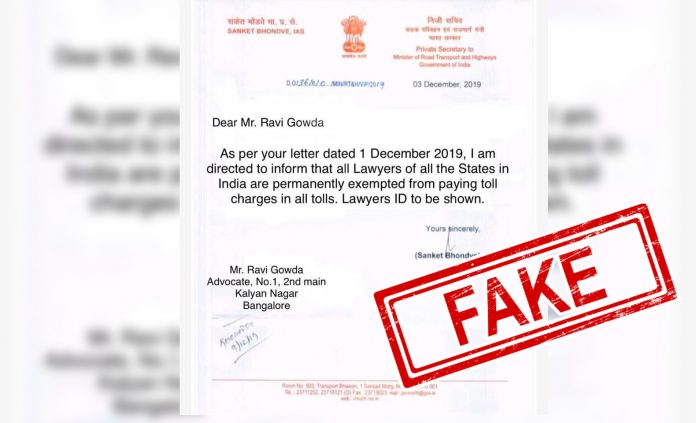 A picture of a letter is being shared online with a claim that lawyers have been exempted from paying toll tax on the national highways.

NewsMobile fact-checked this and found it to be fake.

We checked the official social media account of the National Highways Authority of India and found a tweet where they clarified that no such exemption has been made.

“NHAI clarifies that the user fee collection on National Highways is governed by NH fee rules. As per these rules, Advocates are not exempted from paying user fee (Toll) in NH Fee plazas, ” the tweet read.

NHAI clarifies that the user fee collection on National Highways is governed by NH fee rules. As per these rules, Advocates are not exempted from paying user fee (Toll) in NH Fee plazas. @MORTHIndia @MORTHRoadSafety @ihmcl_official

The same fake news was also called out by the Press Information Bureau of India in a tweet.

Claim: A Letter is being circulated on Social Media, stating that all Lawyers in India are exempted from paying Toll Fees

Reality: #NHAI has clarified that as per NH fee rules lawyers are not exempted from paying Toll Fees

Moreover, we found the original letter on a Facebook page called Consortium Of Lawyers. Even though the claim attached to the letter says ‘No toll tax for Advocates’, the letter simply stated that ‘MORTH has received a letter dated November 13, 2019, regarding the request for the exemption of tax and it has been forwarded to the Chairman, NHAI‘.

The above information proves that the viral letter in circulation has been manipulated and is fake.