Prime Minister Boris Johnson and his Conservatives Party have won the elections to the House of Commons with a comfortable margin on Friday.

The Conservatives have won a total of 365 seats out of total number of 650 seats in the House of Commons. The half way mark is 326. This is well over 38 seats above the majority mark. 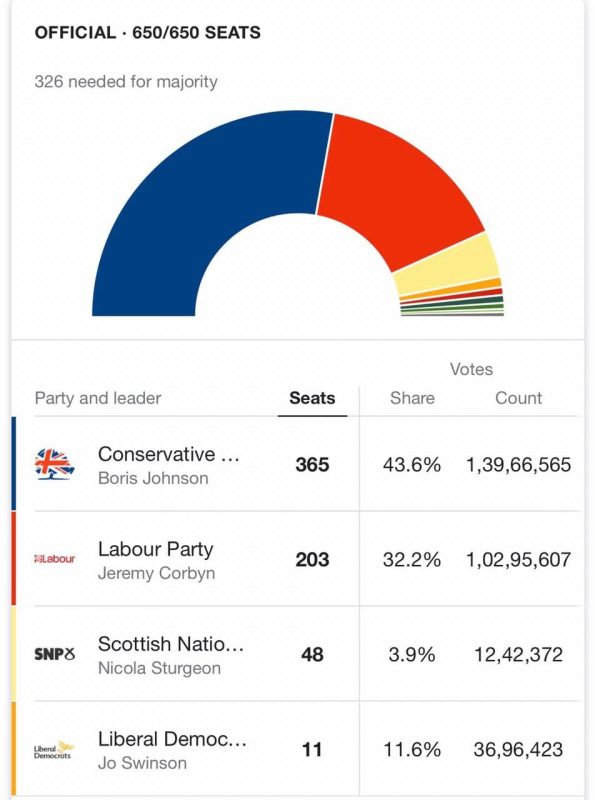 This is being considered to be a decisive mandate by the voters to a Prime Minister and a party that has successfully negotiated a deal with the European Union to leave the bloc.

The elections took place on Thursday.

This is the biggest mandate for the Conservatives ever since the 1983 elections when Margaret Thatcher, considered to be the iron woman secured a mandate which was a whopping 144 seats over the half way mark.

The incumbent government will have its plate full as the decisive mandate raises the expectations of the people.

The agenda of the government will include amongst others issues,

 Not delaying the Brexit vote in the British Government beyond the January deadline and subsequently ensure that British interests are protected during the upcoming negotiations with the European Union.

 The economic situation in Britain appears to be bleak. Hence, it is important to improve the crumbling infrastructure and attract investments into the Island nation. In this regard, it is also important to quickly negotiate, Free Trade Agreements (FTA) with other partners that include the US and India amongst others without compromising British interests.

 The security situation has to urgently improve as Britain has become a breeding ground for various ISIS recruits and homegrown terror groups. The radicalization has resulted in some lone wolf attacks which have been witnessed in Manchester and London in recent times.

 Issues pertaining to the administration of the National Health Service (NHS) will be closely monitored and affordable healthcare is a primary concern in the minds of the people.

Prime Minister Boris Johnson is considered to be a friend of India and many other British Indian MP’s are expected to be offered positions in the upcoming Cabinet.

However, issues pertaining to differences in the trade agreement, migration and a spike in the anti-Indian activities being carried out from UK, is a matter of concern.

Some of the prominent winners include,

Sajid Javid who is currently the Secretary to the Exchequer has once again emerged victorious from the Bromsgrove constituency.