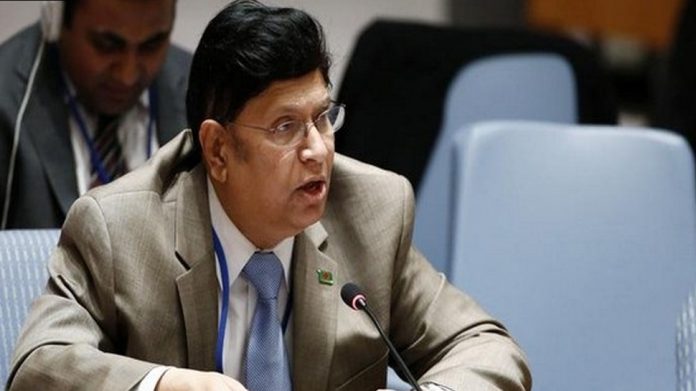 The Bangladesh Foreign Minister AK Abdul Momen has cancelled his three-day visit to New Delhi from December 12-14. He was to attend the Indian Ocean dialogue, the Delhi dialogue and hold a bilateral meeting with the External Affairs Minister Dr S. Jaishankar.

Earlier in the day, there were reports that the visit has been cancelled over the negative portrayal of Bangladesh during the discussion over the Citizenship (Amendment) Bill, 2019.

However, in an interview to ANI, he said:” I had to cancel my trip to New Delhi as I have to participate in the ‘Buddhijibi Debosh’ and ‘Bijoy Debosh’ and more so as our as our State Minister is out of the country in Madrid and our Foreign Secretary is in the Hague.”.

He also added that, “Given the increasing demand at home, I have decided to cancel the visit. However, I am looking forward to attend our next meeting in January. I am sending our DG to attend the event.”

Some sections of the media reported that the Foreign Minister had also lashed out at India’s attempt to create a divide. However, this cannot be confirmed.

The Spokesperson of the Ministry of External Affairs Raveesh Kumar repeated this and also added that the relations between the two countries is in the golden period and no one issue can affect it.

It has now been confirmed that the Bangladesh Home Minister Asaduzzaman Khan who was to attend an event in the Meghalaya capital of Shillong has also cancelled his visit due to the prevailing law and order situation.

Experts have advised India to handle this situation carefully and take Bangladesh into confidence as it has the potential to damage India’s relationship with one of its closest neighbour.

The Citizenship (Amendment) Bill, 2019 which gives citizenship rights to members of six minority communities from Afghanistan, Bangladesh and Pakistan was passed by both house of the Parliament and is currently awaiting the President’s assent.