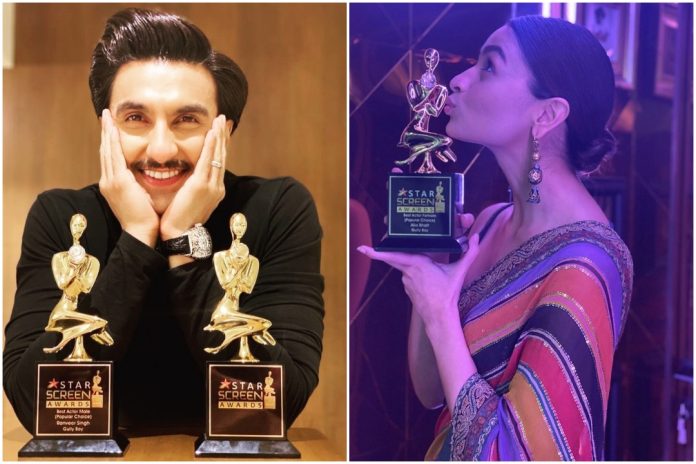 Ranveer Singh and Alia Bhatt are ruling the hearts with their performances as the actors won the Star Screen Awards in the category of Best Actor and Best Actress, respectively for ‘Gully Boy’.

The actors won the award on Sunday in Mumbai.

Gosh! 😍 Double Whammy! 🏆🏆 ‘Best Actor in a Leading Role’ for #GullyBoy & ‘Entertainer of the Year’ at the #StarScreenAwards

The versatile performance delivered by the co-stars in Zoya Akhtar’s directorial film ‘GullyBoy’ was raved immensely by the public and the flick was a hit at the box office.

Ranveer Singh whose energy is contagious also won an award in the category for the best entertainer.

The ‘Padmaavat’ actor was looking all over pumped up with the recognition received, posted a picture of him along with the awards in his Instagram handle.

Placing the two prestigious awards ahead of him, wearing a black turtle neck sweater, the actor had a huge satisfied smile on his face as he poses for the camera.

“Gosh! Double Whammy! ‘Best Actor in a Leading Role’ for #GullyBoy & ‘Entertainer of the Year’ at the #StarScreenAwards”, the caption read.

Alia Bhatt, year after year is just making her foot stronger in the industry by taking up versatile roles and getting completely into the skin of the character.

Alia as Safeena in ‘Gully Boy’ was no less than perfect. Her performance was widely appreciated and also won her the Best Actress Award at the Star Screen Awards.

Thanking the whole team of the musical drama, Alia hopped on to Instagram sharing a picture of her kissing the trophy.

Donned in a saree, the ‘Highway’ actor wrote a rather long caption to express her happiness and gratitude towards the makers, co-star and the whole team of the movie.

Ranveer and Alia had won these accolades for ‘Padmavaat’ and ‘Raazi’ last year.

Siddhant Chaturvedi who stood aside with his splendid performance in the movie also won the most promising newcomer award which he dedicated to his parents.

With an already impressive array of roles in his list, Ayushmann Khurrana’s ‘Article 15’ emerged as the other big winner as it won the Best Film Critics Choice award and got the actor the Best Actor Critics Choice (Male) award.