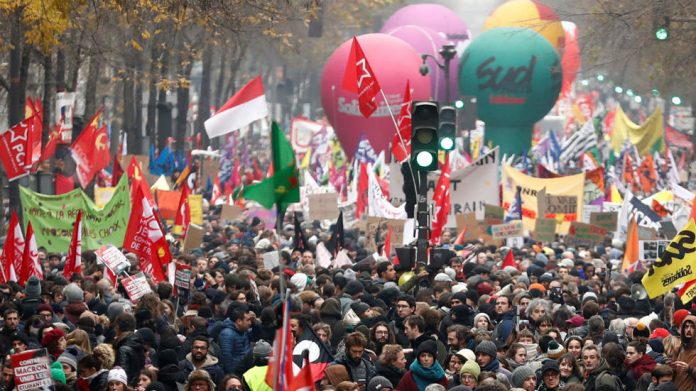 Protesters in France have planned another major strike on Tuesday against the pension reforms being enacted the government. These strikes began on Thursday and are continuing relentlessly.

President Emmanuel Macron’s government is planning to introduce a single points-based pension scheme that would require the people to work “a bit longer” and replace over a dozen advantageous plans currently enjoyed by the workers. This is expected to raise the retirement age from 62 years currently upwards.

The worst affected is the transport sector even as the SNCF rail operators are operating just 10-15% of the high speed and regional trains.
The Paris metro is severely disrupted. Nine lines entirely shut, five only partially operating and only lines 1 and 14 which are driverless working normally.

Many cancellations too have reported on the International Eurostar and Thalys services.

Air travel is back even as the civil aviation authorities have announced the return to normalcy.

These pension reforms have also led to agitations from the teacher’s union, the yellow vests, air traffic controller’s union and off duty policemen amongst others.

The yellow vests have planned a demonstration on Saturday.

Some of these agitations turned violent, forcing the police to fire tear gas shells. In this process, a few people including a Turkish journalist were injured.