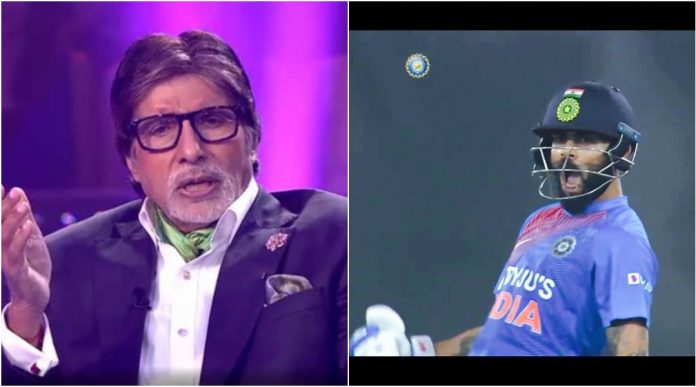 After watching Virat Kohli’s knock of 94 runs against West Indies in the first T20I of the three-match series, Bollywood actor Amitabh Bachchan said one should not mess with the India skipper.

Bachchan used his dialogue from the cult movie ‘Amar Akbar Anthony’ to come up with an analogy to describe Kohli’s attitude.

“Yaar, how many times I have told you this, don’t tease Virat, but you did not listen to me, now see he gave you a perfect response, look at West Indies’ face, how much he rattled them (with due respects to Anthony Bhai),” Bachchan tweeted in Hindi.

In the 16th over of India’s innings, Kohli was seen imitating Williams. The first ball of the over was dispatched for a boundary. The next ball was then flicked for a six on the leg side.

It was then that Kohli brought out the notebook celebration and Williams looked on in amusement.

In 2017, Williams had given Kohli a ‘notebook-style’ goodbye after taking his wicket and Kohli clearly remembered it.

This innings by Kohli enabled India to chase down the target of 208 with eight balls to spare.

After the match concluded, Kohli revealed that Williams had brought out the notebook celebration in 2017, so he remembered that, and used it when it was appropriate.

“No, it is not the CPL. It happened to me in Jamaica when he got me out so I thought I would tick a few in the notebook as well but all good, smiles out there, in the end, that’s what you want to see, good competitive cricket but at the end of the day we shake hands, that’s what cricket is all about, play hard but at the end have respect for your opponents,” Kohli said at the post-match ceremony.

India and West Indies will next lock horns in the second T20I on Sunday, December 8.