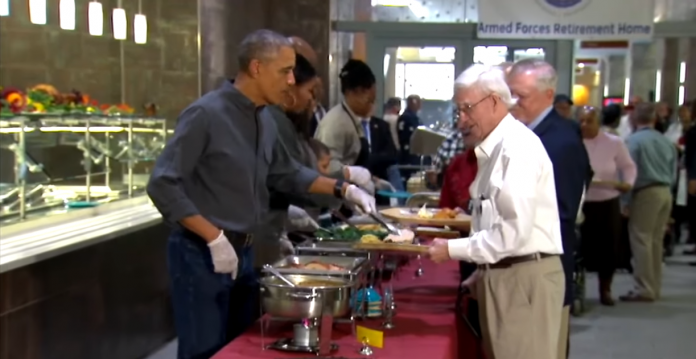 A video has been doing rounds on social media in which former US President Barack Obama can be seen serving food.

The text attached to the video claims that Obama is now working in a hotel.

When NewsMobile fact-checked the video, we found the claim attached to it to be false.

We ran a search using the keywords ‘Obama serving food’ and found that this video is from 2016.

This video was present on the YouTube channel of ABC News, which was uploaded on Nov 28, 2016. The title read, “Obama Serves Thanksgiving Meal at Armed Forces Retirement Home.”

“On the night before Thanksgiving, Pres. Barack Obama and the first family helped serve up turkey and all the trimmings to residents of a retirement home for military veterans in Washington, D.C. ” the description of the video read.

Here’s the link to the news report. According to the report, this was President Obama’s eighth and last turkey pardon before his term as the President of the United States came to an end.

The above information proves that the video is old and President Obama is not serving in a hotel and hence the claim attached to the video is false.