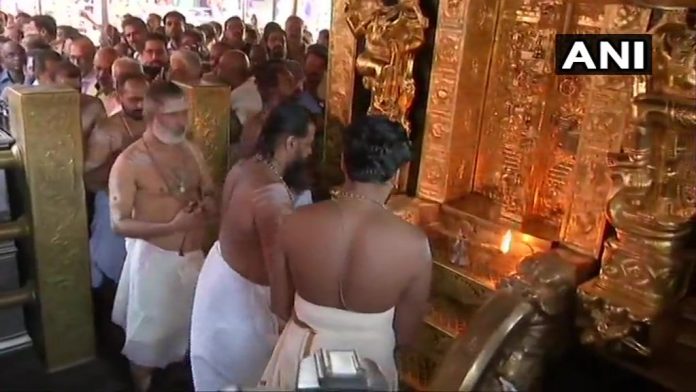 The Sabarimala temple in Kerala opened on Saturday evening, amid heightened security arrangement by the Kerala government in and around the hilltop shrine.

The temple opened for the 41-day annual pilgrimage at 5 pm two days after the Supreme Court referred the review petitions against its 2018 verdict to a seven-judge bench.

Earlier today, at least five women of childbearing age were sent back by the police. When they insisted, a senior police officer said they have strict instructions not to allow women in the age group of 10-50 to the temple.

Kerala: Priests open the sanctum sanctorum of the #SabarimalaTemple. pic.twitter.com/fxDom81vdy

The state government has said that the shrine is “no place for activism” and the activists hoping to make a statement by taking up the pilgrimage will not be given police protection.

In September 2018, the top court by a majority verdict of 4:1, ended the centuries-old ban on women and girls between 10 and 50 – or those of a menstrual age — from entering the famous Ayyappa shrine, calling the religious practice “illegal and unconstitutional”.

After the apex court verdict, more than 60 petitions were filed against its verdict that sparked violent protests in Kerala. The petitions argued that the temple deity, Ayyappa, is a celibate and centuries-old beliefs should not be disturbed by the entry of menstruating women worshippers.