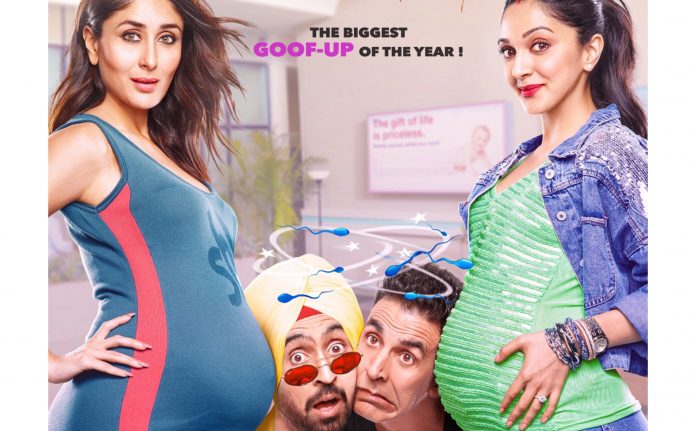 This Christmas, get ready to catch the ‘biggest goof-up of the year’, a glimpse of which was shared by Akshay Kumar as he unveiled two first look posters of ‘Good Newwz’!

At a closer look, it becomes clear that squashing the actor’s face are two pregnant ladies, probably, Kareena Kapoor and Kiara Advani.

ALSO READ: DeepVeer share adorable picture from Tirupati as they seek blessings on…

Sharing the quirky poster on Twitter on Thursday, the actor wrote, “‘Squeezing’ in some #GoodNewwz for you this #Christmas season. Stay tuned, the biggest goof-up of the year is coming!”

He also shared the first look poster of Punjabi singer and actor Diljit Dosanjh, who is similarly squeezed between two bellies.

Akshay captioned, “There’s always someone who ends up with the same #Christmas present as you!#GoodNewwz in cinemas on 27th December.”

The story of the upcoming feature revolves around two married couples and their journey of love. In the film, Akshay and Kareena, as Honey and Monika, will be seen trying to conceive a baby.

The film went on floors in November last year. Apart from Akshay, Kareena and Kiara, it also stars Punjabi singer and actor Diljit Dosanjh who has acted in a number of Hindi films including ‘Udta Punjab’ and ‘Arjun Patiala’.

Helmed by Raj Mehta, ‘Good Newwz’ will hit the theatres on December 27 this year.