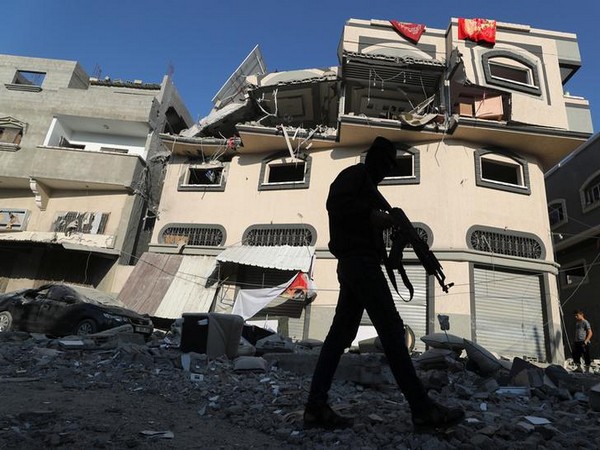 Israel killed a top commander from the Iranian-backed Palestinian militant group Islamic Jihad on Tuesday in the Gaza Strip, drawing day-long rocket salvoes in the worst cross-border fighting in months.

Palestinian group Islamic Jihad announced on Tuesday that one of its commanders was killed in an airstrike by Israeli forces on his home in the besieged Gaza Strip on Monday night.

Baha Abu al-Ata, 42, was killed with his wife in the airstrike that ripped through the building in Gaza City’s Shejaiya district.

As the rocket fire and Israeli air-strikes continued into the night, Gaza medical officials said 10 Palestinians had been killed, including Al-Atta and his wife.

About 25 Israelis were hurt in the Gaza rockets salvoes, some of which reached as far as Tel Aviv.

The U.N.’s Middle East envoy was en route to Cairo to mediate a truce, a diplomatic source told Reuters.

“Israel is not interested in escalation, but we will do everything required to defend ourselves,” said Netanyahu, who oversaw Israel’s last Gaza war in 2014. “This could take time.”

At Al-Atta’s funeral in Gaza, mourners fired guns into the air chanting “revenge!” as Islamic Jihad leader Khaled Al-Batsh said: “Israel executed two coordinated attacks, in Syria and in Gaza, in a declaration of war.”

A video was tweeted by the Israel Defence Forces’s official handle that showed what had happened in Israel on Tuesday.

This is what’s been happening in Israel today: pic.twitter.com/8C5gkyGOq9

The statement by Islamic Jihad’s armed wing came after Israel confirmed it had targeted Bahaa Abu al-Atta, in an airstrike.

A statement by Islamic Jihad’s armed wing read that that strike killed Al Ata and his wife and injured two others. Without elaborating, the group said that al Ata was undergoing “a heroic act” when he was assassinated, reported Al Jazeera.

Separately, the Palestinian group said that Israel also attacked the home of one of its officials in the Syrian capital, Damascus.

The Israeli military has said that the operation against Al-Atta was authorised by country’s Prime Minister Benjamin Netanyahu. “Abu Al-Atta was responsible for most of the Palestinian Islamic Jihad’s activity in the Gaza Strip and was a ticking bomb.