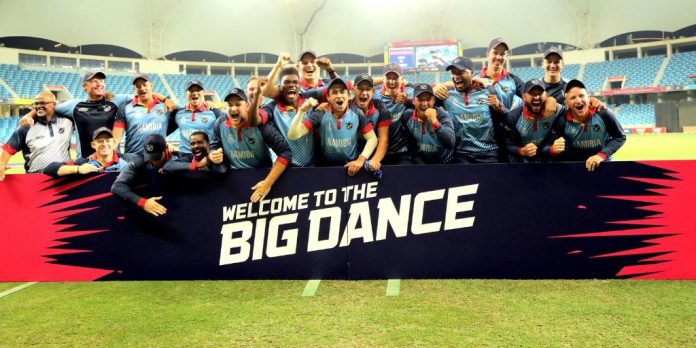 Namibia will be appearing in their first-ever T20 World Cup as the side defeated Oman in the qualifying tournament here in Dubai.

With this win, Namibia has become the fourth team to qualify for the T20 World Cup Australia 2020. They have joined Papua New Guinea, Ireland and the Netherlands, International Cricket Council (ICC) reported.

This will be Namibia’s first appearance at a senior World Cup since they featured in the 50-over event in 2003.

ALSO READ: Shakib Al Hasan steps down from MCC’s Cricket Committee after getting banned for two…

“Nine days ago, Namibia had just lost by 81 runs to PNG – their second consecutive defeat at the #T20WorldCup Qualifier. Five games and five wins later and they’re on the plane to Australia. A phenomenal turnaround from the Namibian team,” T20 World Cup’s official handle tweeted.

In the match against Oman, Namibia’s JJ Smit scored 59 runs off just 25 balls to enable the side to qualify for the eight-team first round of the World Cup, slated to be played next year.

Smit’s half-century off 20 balls was the fastest of the tournament.

Namibia posted a score of 161/7 in the allotted twenty overs after opting to bat first.

While batting, Namibia was in a spot of bother at 67/5, but Smit and Craig Williams enabled the side to go past the 160-run mark.

At one stage, Oman was cruising towards the target as the team was 57/1 after the powerplay overs. However, as soon as Namibia introduced spinners, the tide of the match shifted in their favour.

In the end, Namibia was able to restrict Oman to just 107 runs and as a result, winning the match by 54 runs.

Apart from the qualification position, Namibia now has a chance to extend their run of five undefeated games in the semi-final against PNG on Friday.