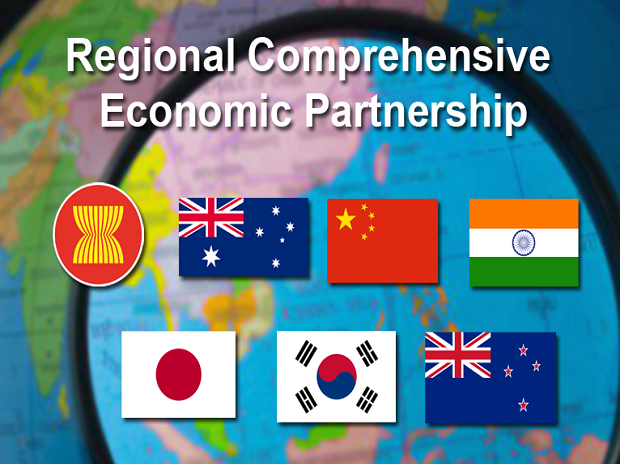 1. What is RCEP and what is its significance?

The Regional Comprehensive Economic Partnership is an economic agreement consisting of 16 nations. It includes the 10 nations which are part of the Association for South East Asian Nations (ASEAN). These nations include: Brunei, Cambodia, Indonesia, Laos, Malaysia, Myanmar, Philippines, Singapore, Thailand and Vietnam. In addition to the members of the ASEAN community it also includes six other nations which are Australia, China, India, Japan, New Zealand and South Korea.

This trading block contains little less that half of the world population, a third of the world GDP and a little more than a quarter of the global trade shares.

2. When did this come into beginning and what is the current status?

Talks on finalizing this agreement began back in 2012. The talks are expected to conclude and an agreement signed by November 2019. It has been delayed considerably by the slowdown and uncertainty in global trade.

Now it appears unlikely that this deal will be reached by November 2019. In the recently concluded meeting, stalemate was the order of the day. Nations differed on many points. India was represented by its Minister for Commerce and Industry Piyush Goyal.

Now a leadership summit is expected on November 4th in Bangkok in which Indian Prime Minister Narendra Modi is expected to address it.

3. What are the advantages and disadvantages of this agreement?

The first advantage is that this will bring in an element of stability in trade in a region known for its unpredictability and instability.

The disadvantages include being a part of China dominated trade alliance. Many nations including India are negotiating separate trade deals with the US and this may lead to further complications. This has to be deftly negotiated.

4. What are India’s concerns with respect to this agreement?

The primary concern is that of the trade imbalance with China which may further increase. It will also provide the Chinese an opportunity to dump goods into the Indian market. Local industries will suffer heavily as a result. India has already imposed safe guard duties on import of solar panels from China and imposed anti-dumping duties on import of products such as Steel. According to various reports, India may have to reduce its duties on almost 80% of the products from China.

Indian agricultural sector may experience certain challenges. India may have to cut duties on almost 86% of its products from Australia and New Zealand. This is mainly dairy products.

Also, duties will have to be cut on 90% of products from South Korea, Japan and ASEAN nations.

It has been reported that India has agreed to sign the chapter related to Investment. There are two aspects related to this which merit some attention. The first one being that India cannot insist on transfer of technology from foreign companies and second is the issue of transfer pricing. The agreement clearly mandates that the host nation cannot insist on regulating transfer of assets and profits from an Indian company to a parent foreign company based abroad.

The issue of data localization is another issue. The chapter on e-commerce would make it tough for India to insist on companies storing Indian data in India. The Reserve Bank of India has mandated that all data related to payment  from India has to be served in servers based out of India. The Data Regulation Act is currently pending before the parliament.

Finally, the free movement of natural persons has not been given much attention. This will ensure that Indian workers are able to migrate without any restrictions. The WTO Agreement on Services categorizes this as Mode 4.

As mentioned before, the deal will have to be concluded by November 2019. China has insisted on signing the agreement with or without naysayers such as India who can join in at a later date. This has received support from Malaysia.

This may harm Indian interests and it is yet to be seen how this concludes. All attention shifts to the leadership summit in Bangkok on November 4th.