India has issued an advisory to its citizens visiting Turkey, asking them to “exercise utmost caution” while visiting the Middle East country. 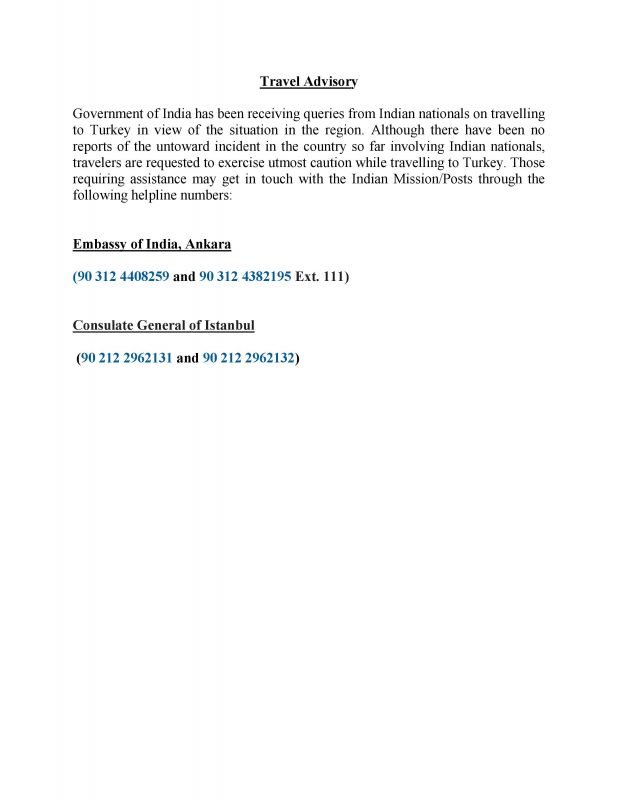 Helpline numbers of the Indian Embassy and Consulate General of Istanbul have been mentioned for those requiring assistance.

Relations between India and Turkey strained lately after their President Recep Tayyip Erdogan, at the 73rd UN General Assembly session, made statements against abrogation of Article 370 by New Delhi.

Expressing regret and strongly condemning the statements made by Turkey on Kashmir, New Delhi asked Ankara to get a proper understanding “of the situation on the ground before” commenting on the matter.

India also expressed deep concerns about the unilateral military offensive by Turkey in north-east Syria, saying that Ankara’s actions can undermine stability in the region and has the potential for causing humanitarian and civilian distress.

On the other hand, Turkey also supported Pakistan during the Financial Action Task Force (FATF) plenary meeting in Paris earlier this month, a stance which did not go down well with India.

The terror-financing watchdog has warned Pakistan to take prompt action against terror funding by February 2020 or face blacklisting, until which the country will remain on its grey list.