India on Tuesday won the final Test of the three-match series by an innings and 202 runs to whitewash South Africa 3-0 at JSCA Stadium Complex here.

India required two wickets on the fourth day of the Test. South Africa resumed their innings from 132/8 and were only able to add one run to their scoreboard as India bowled out visitors to 133 after enforcing the follow-on.

Spinner Ravichandran Ashwin and Shahbaz Nadeem scalped the last two wickets of Proteas. With this win, India managed to clean sweep South Africa in a Test series for the first time. 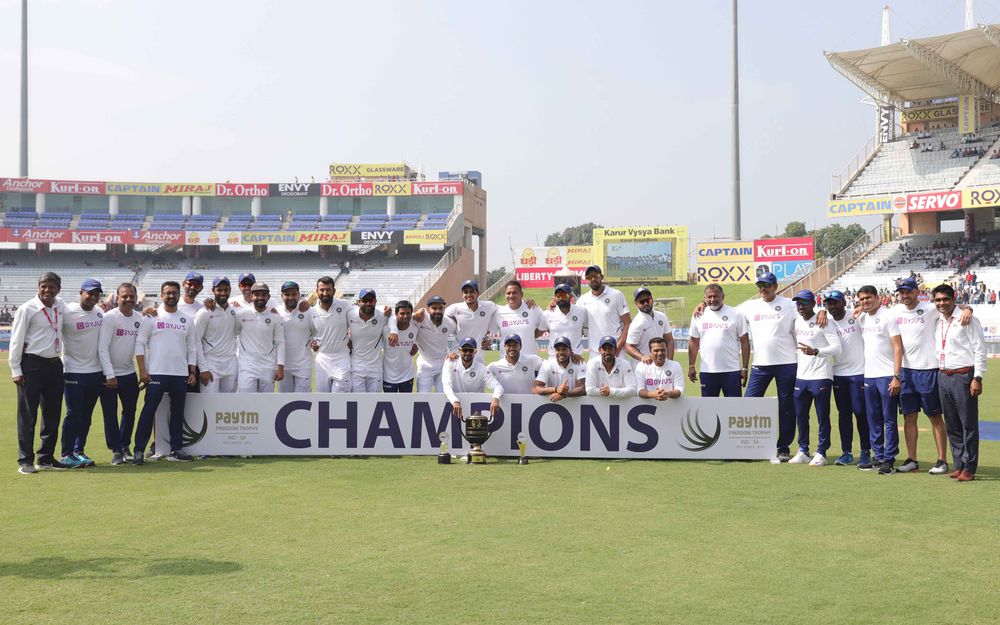 Earlier on day three, India displayed a brilliant performance with the ball as they ended the Proteas’ first innings at 162 and then clinched eight wickets in the second innings.

South Africa’s second innings was no different from their first as they had a very poor start and gave away two early wickets — Quinton de Kock and Zubayr Hamza — in three overs.

Opener Dean Elgar was joined by Faf du Plessis, however, the latter fell to LBW off Mohammed Shami’s delivery. In his next over, Shami took the wicket of Temba Bavuma, who was caught behind for a duck.

South Africa faced a major blow as Elgar was struck on the helmet by Umesh Yadav and the batsman left the field. Later, Theunis de Bruyn was named as his concussion replacement.

George Linde and Heinrich Klaasen took the charge but failed to stitch a partnership as the latter was adjudged LBW off Yadav’s delivery.

Soon after, Linde too was sent back to the pavilion as he was run out due to bad communication. Dane Piedt scored 23 runs before Jadeja bowled him and the visitors were seven down before they could reach the 100-run mark.

Kagiso Rabada came out to bat when the team was on 98/7 and joined Bruyn. Rabada started smashing boundaries but after a few shots he gave away an easy catch to Jadeja off Ravichandran Ashwin. South Africa did not lose more wickets thereafter.

Opening batsman Rohit Sharma was awarded player of the match as he played a knock of 212 runs.