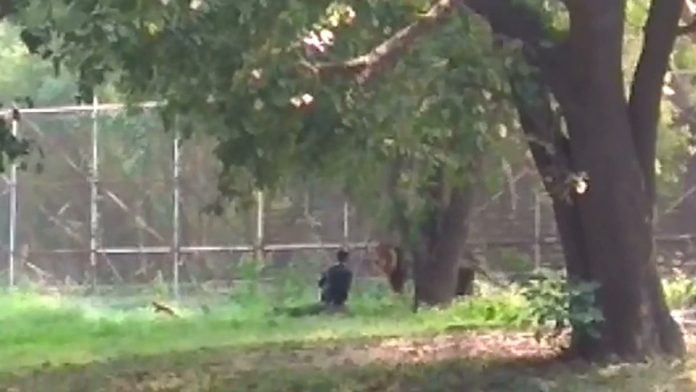 In a startling incident, a man entered inside the enclosure of a lion at the Delhi Zoo here after climbing over the metal grille on Thursday. Alert zoo staff, however, acted quickly and brought the man, who is said to be mentally unstable, out safely by tranquilizing the big cat.

Heartstopping visuals from the Zoo show the 28-year-old Rehan Khan spending several moments sitting face to face with the big cat and appeared to be talking to it and even casually lay down before Zoo officials rescued him before any harm.

Chinmoy Biswal, Deputy Commissioner of Police (Southeast) told ANI: “He is Rehan Khan, a 28-yr-old man from Bihar. He seems to be mentally unstable. He was immediately brought out without any injury.”

“He kept telling us that he has come to die and to not rescue him. We rushed to the spot and gave him a ladder to step out but he did not listen. Then we tranquilised the lion and rescued him,” the official said.

In September 2014, a similar incident took place where a mentally challenged man was mauled to death by a white tiger at Delhi Zoo.

The deceased was identified as Maqsood, a factory worker and resident of Anand Parbat area of the national capital.