Prime Minister Narendra Modi is slated to address mega rallies in Charkhi Dadri and Kurukshetra in Haryana on Tuesday.

Modi addressed the first of his four grand rallies here in Ballabhgarh on Monday. His last rally in the state will be in Hissar on October 18, a day before the last day of election campaigning. 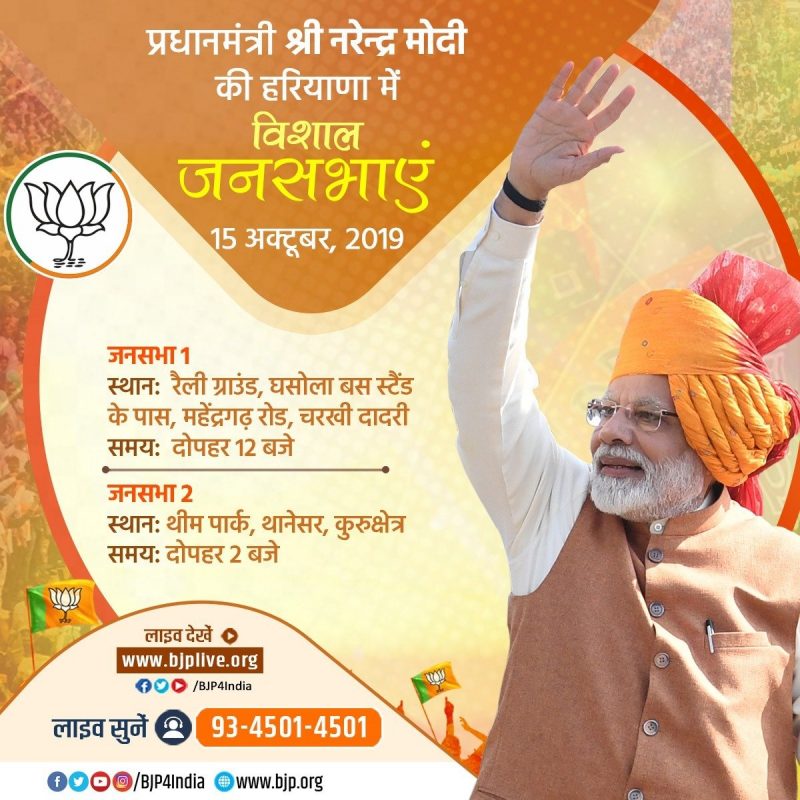 In Ballabgarh, he had targetted the Congress party for opposing Triple Talaq Bill in the Parliament and said that the opposition party hoped to do politics of ‘”Muslim Vote bank” but the big decision was implemented without any opposition in the country.

Just like his first rally in the state, Modi will woo the voters with various schemes and development work initiated by Haryana Chief Minister Manohar Lal Khattar’s along with the revocation of Article 370 from Jammu and Kashmir.

In its manifesto titled ‘Mhare sapno ka Haryana’ (my dreams of Haryana), the BJP has made a host of promises ranging from launching Haryana start-up mission, constitution of a new ‘Yuva Vikas and Rozgar’ ministry and one All India Institute of Medical Sciences (AIIMS), doubling of farmers’ income by 2022 and increase in pension.

Elections to the 90-member Haryana Assembly will be held on October 21 along with 288-member Maharashtra Assembly.

The counting of votes is scheduled to commence on October 24.