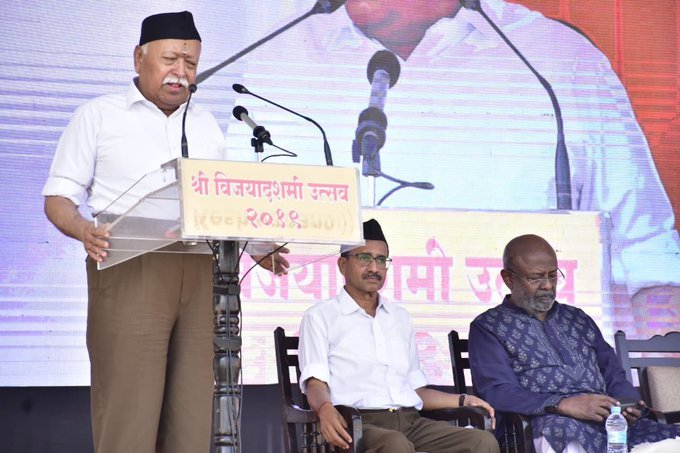 Nagpur: RSS chief Mohan Bhagwat on Tuesday said that there is ‘too much discussion’ about the ‘so-called’ economic slowdown is unwarranted as it makes businesses and people wary and leads to a decline in economic activity.

The government was taking measures to improve the situation, and we must have faith in it, Bhagwat said, addressing a gathering of the Rashtriya Swayamsevak Sangh on the occasion of Vijayadashmi.

“The country is growing. But the world economy goes through a cycle, and at times it faces some hurdles that slow down the growth. Then it is called a slowdown,” Bhagwat said.

“An economist told me that you call it recession only when you report growth rate of below zero. But we are having a growth rate of around 5%. One can show concern towards it, but there is no need to discuss it,” he said.

“Discussion over it leads to creation of an atmosphere, which affects (people’s) conduct. Too much discussion about so-called slowdown would make the people in business and trade believe that economy is really slowing down and they would become more conservative in their actions. It will eventually slow the growth of our economy further,” he said.

“The government has shown sensitivity towards the issue and has taken some steps,” he said.

The government also faced some (external) factors such as the trade war between the United States and China, the Sangh supremo said.

“We need to trust our government. We have taken so many steps, there will be some positive impact in coming days,” he said.