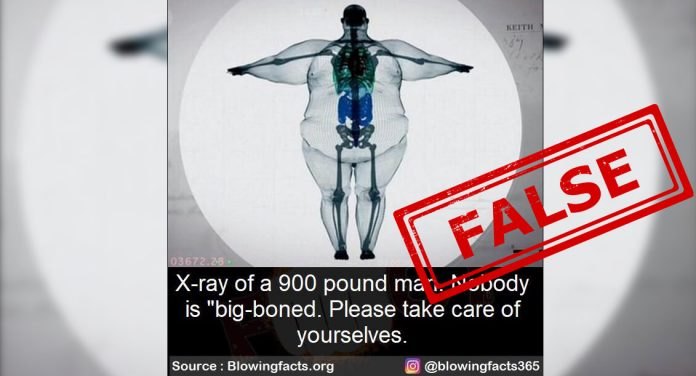 A picture is going viral on social media with a claim that it is an x-ray of a 900 pounds man.

” X-ray of a 900-pound man. Nobody is “big-boned. Please take care of yourself,” the text on the post read.

When NewsMobile fact-checked the viral picture, we found the claim to be fake.

On putting the image through Reverse Image Search, we found that the picture is a screenshot of a clip from a documentary – 70 Stone And Almost Dead. This documentary was about Keith Martin, a British man who weighed over 900 pounds.

We found the specific video segment of the documentary on a site called Vimeo titled, “Saving Britain’s 70-Stone Man // BMI.”

In the video, it is clear that the segment from which the screenshot has been taken is a computer generated model to give viewers a better understanding of the skeleton structure of Keith.

This proves that it is not an actual x-ray and hence the claim was fake.