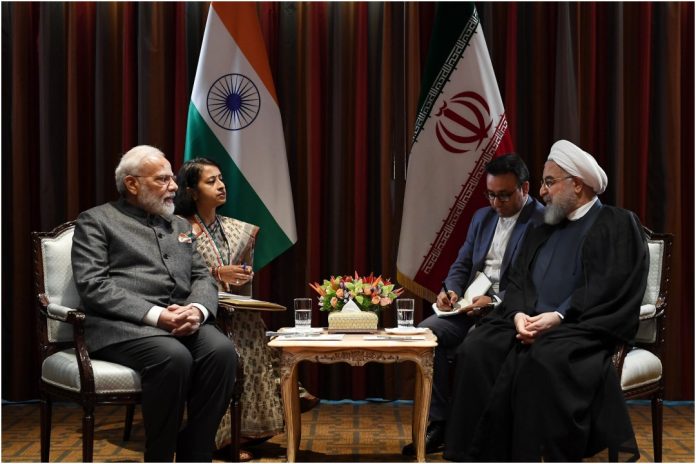 The Indian delegation comprised of Minister of State for External Affairs V Muraleedharan and Foreign Secretary Vijay Gokhale among other officials, while Iranian Foreign Minister Javad Zarif and other representatives were present on the Iranian side.

They discussed bilateral relations and exchanged views on regional and global developments of mutual interest.

Noting that India and Iran shared old and civilisational ties, the two leaders positively assessed the progress in bilateral relations since their first meeting at Ufa in 2015. They especially mentioned operationalisation of Chabahar Port and noted it’s importance as gateway to and for the landlocked Afghanistan and the Central Asian region.

Prime Minister reiterated India’s support for giving priority to diplomacy, dialogue and confidence building in the interest of maintaining peace, security and stability in the Gulf region, which is of vital importance for India.

The bilateral comes soon after Modi’s meetings with US President Donald Trump — once during the Howdy Modi! event on Sunday and then for a bilateral in New York on Tuesday.

During his latest address at the UNGA, Trump tore into Iran and labelled it as one of the “greatest security threats facing peace-loving nations”. He also urged nations to not “subsidise Iran’s bloodlust”. The United States also sanctioned Chinese entities on Wednesday for transporting oil from Iran, as per the US Secretary of State Michael Pompeo.

Tensions between Iran and the US have been on the rise, especially after Trump pulled out from the Iran nuclear deal and reinstated tougher sanctions on Tehran.

The United States also refused to extend sanction waivers given to eight countries — including India — which allowed the nations to temporarily continue buying Iranian oil in the wake of stronger sanctions. The waivers expired on May 2.