Home Home Slider No, the man joining the US Army in this viral video is... 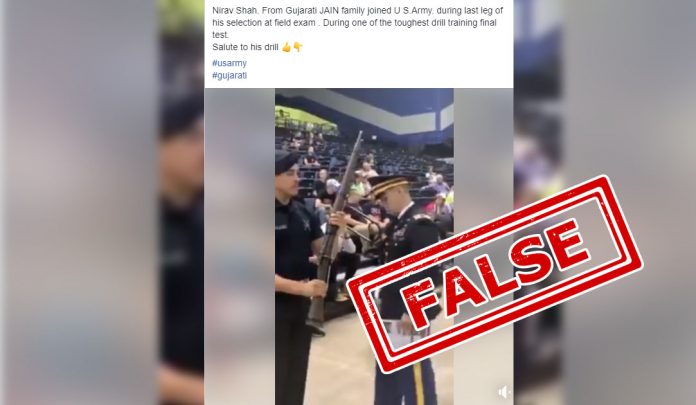 A video of a man doing a drill with his rifle is being shared on social media claiming that he is Nirav Shah from Gujarat and video is from the last stage of his selection for the US army.

“Nirav Shah. From Gujarati JAIN family joined U S.Army. during last leg of his selection at field exam . During one of the toughest drill training final test….
Salute to his drill 👍🎩🎩off.. performance💐💐😊 ” the caption read.

When NewsMobile fact-checked video, we found the claim to be fake.

On watching the video carefully, we found a banner with ‘National High School Drill Team Championship‘ written on it.

Also, we noticed the name of the person was written on his uniform and it started with ‘A ‘, and his surname started with ‘P’ and ended with ‘N O’ but who name tag was not clearly visible.

When we ran a Google search using the keywords ‘National High School Drill Team Championship‘, we found that is a Drill Team Competition, held in Daytona Beach, Florida.

According to its website, the championship has two exhibits- Solo and Group. So, we run a search on YouTube with keywords ‘World Drill Championship solo‘ and found the same video uploaded by Alejandro Paulino on May 5, 2019.

When we check out his YouTube page, we noticed that many videos are of the same person. Also, his name starts with ‘A’ and his surname with ‘P’ and ended with ‘N O’, just like the t-shirt in the video; so, we decided to investigate further.

We found his name at the 10th position in the 2015 competitors list.

A search on Facebook with keywords ‘Alejandro Paulino world drill’ lead us to a post by Paulino dated May 6, 2019. The caption on the post read, ‘1st place at the 2019 World Drill Championships. where he posted the same video.

This proves that the claim attached to the viral video is false.