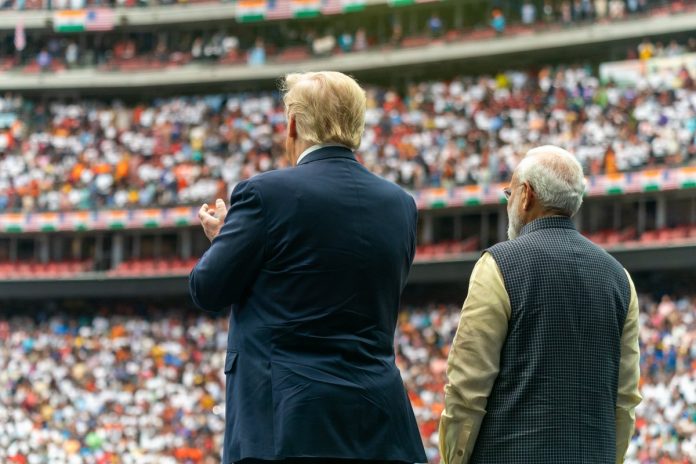 The President of the world’s preeminent global power- the US- does a Sunday show equivalent of a super bowl, with hugs, praises and a victory lap- all never done before in the global world of diplomacy.

This is what India’s Prime Minister Narendra Modi achieved on Sunday as he stood alongside the US President Donald Trump and heaped praises on him and virtually endorsed him for a re-election in 2020.

PM Modi introduced Trump with a slew of laudatory adjectives for the US President and Trump returned the compliment in his speech. The display of chemistry was amazing between the two.

From Article 370, a good hard sell for brand new India and a tongue lashing for Pakistan as an epicentre of terrorism, Modi’s address had the right mix.

He was conscious of the fact that Trump is a show man, a ‘deal-maker’ as he describes him, who loves massive shows and he gave him one at the blockbuster at Houston.

Packed with Indian-Americans from across the US and even Canada it was a show packed with cultural performances, with a show of hands of lawmakers who lined up to greet Trump and Modi.

As both took a victory lap, they knew that the ‘Howdy Modi!’ event gave them an amazing ROI.

A message to the world that India matters in Trump’s school of things.
For Trump, it was an assurance of support amongst the dominant Indian-American community ahead of the 2020 polls.
And above all more investment in India and more jobs for the American people.

A day ahead, the two sides inked the biggest LNG deal and Prime Minister Modi may promise more as he sits down with the top US CEOs in New York this week.

Both were firm on the issue of terrorism and the cooperation may cement further.

But above all the presence of the US President at an event for the Indian Prime Minister sends out a huge strategic message- that under Trump and Modi, it is a new strategic dawn for the Indo-US ties.

Here are the key takeaways of what they said-