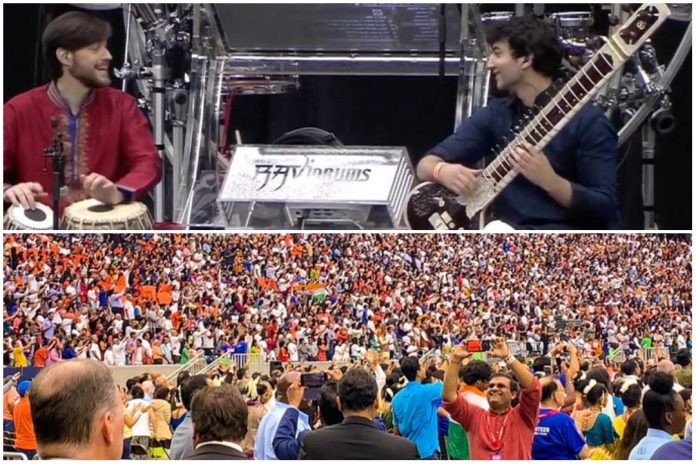 From Jagjit Singh’s ‘Hothon Se Chuu Lo Tum’ to Ed Shreen’s ‘Shape of you’, the India-US cultural harmony was showcased by around 400 artistes and community members from Texas in a well-versed performance ahead of Prime Minister Narendra Modi and US President Donald Trump’s arrival at the mega-event — ‘Howdy, Modi!’ — on Sunday.

Ahead of PM Modi and Trump, sharing a stage before the largest gathering ever — over 50,000 Indian-Americans, a Punjabi troupe was also seen enthralling the crowd as they played dhols and danced over its beats, with more members from the audience also joining-in with excitement.

The main event was preceded by a 90-minute-long music, dance, and multimedia show by 27 groups performing seamlessly to showcase the diversity in the Indian-American community.

Starting with the hymns of Sikh scriptures (Gurbani), it included a performance by girls dressed in cheerleader dresses and cowboy hats dancing to a country song ‘Kick a little’ by the band ‘Little Texas’.

The cultural event included cultural performances from different states of India and America.

Telugu, Gujarati, and Rajasthani dance performances were also showcased at the event by the artistes in traditional attires. One group performed ‘Ras dance’ on the popular song ‘Rajvaadi Odhni.’

Some artistes even beatboxed the ‘Guru Mantra’ at the event and DJ’ed Bollywood songs whereas a dance-off between Kathak and tap dancing compelled the audience to break out in endless applause.

Reverberating with the chants of ‘Bharat Mata ki Jai’ and praises for Modi, Houston’s NRG stadium is jam-packed with an enthusiastic audience, some of them dancing in the aisles, waving tricolours and sporting T-shirts in support of the Indian Prime Minister.

Several attendees wore a customized red and white ‘Howdy Modi!’ shirt, while several waved Indian flags amidst the ocean of people at the mega event.

The event has been envisioned on the theme of ‘Shared Dreams, Bright Future’ and would focus on strengthening Indo-US relationship.

It highlights the contributions of Indian-Americans in enriching the American life for the last seven decades as well as the key role they have played in strengthening relations between the two nations.