Home NM FACT CHECKER Did Amit Shah and other leaders consume alcohol in Gujarat? Here’s the... 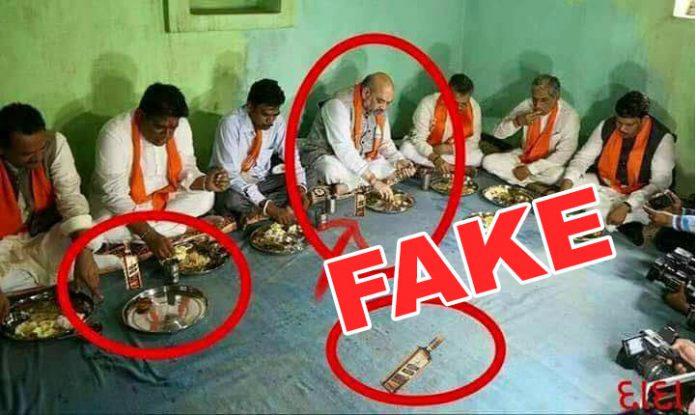 A picture is being shared on social media in which Home Minister Amit Shah and other leaders can be seen eating. Interestingly you can also see a few bottles of alcohol and it is also being claimed that the picture is from Gujarat where alcohol is banned. 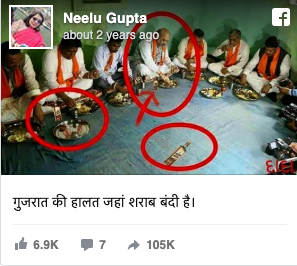 ALSO READ: Are pigeons in Srinagar’s Jamia Masjid dying of starvation? Here’s the…

At the time of filing the report, the above post had more than 1 lakh shares.

When NewsMobile fact-checked the picture,we found it to be morphed.

On putting the image through Reverse Image Search, we found that the picture is from 2017 when Amit Shah and other leaders had a meal at a tribal’s house in Devaliya village in Gujarat.

The picture was uploaded on the official Twitter page of BJP on May 31, 2017 along with the text, ” In pictures : Shri @AmitShah having lunch at the residence of BJP’s tribal leader & booth pramukh of Devaliya village in Gujarat.”

In pictures : Shri @AmitShah having lunch at the residence of BJP’s tribal leader & booth pramukh of Devaliya village in Gujarat. pic.twitter.com/lwpJPeVkzN

In the FAKE vs REAL collage, it is clear that the alcohol bottles have been added using photoshop software.