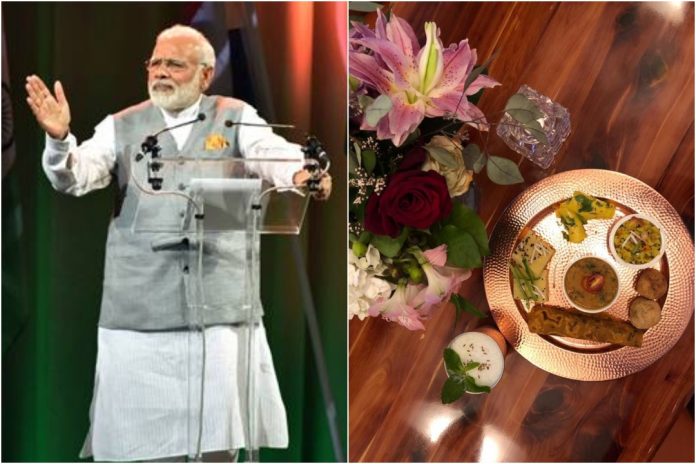 The celebrations for the ‘Howdy, Modi!’ event has officially kicked off, with people gathering at a community hall in Houston.

NewsMobile partners Republic TV on Saturday visited the famous Indian restaurant Kiran’s -run by Chef Kiran Verma, which will be serving meals to the Prime Minister.

Verma has shared her origins in Orissa and her vast cooking career spanning 25 years. She has expressed her joy in serving the Indian Prime Minister. She also revealed the special ‘Namo Thali and Namo Mithai Thali’ which will be served to PM Modi.

“We serve north Indian cuisine. But I like taking a little from East, West and South of India. I was born in Orissa. I started cooking professionally 25 years ago and the restaurant is 2.5 years old. I am going to serve the Prime Minister with the Namo Thali, which will be available to the public.  It’s such an honour to cook for my Prime Minister gives me special joy. I want to do everything from Namo Thali, Namo Mishti/Mithai Thali to honour our PM,” she said.

Prime Minister Narendra Modi and President Donald Trump will be jointly addressing ‘Howdy, Modi’, a mega event in the NRG Stadium in Houston for which more than 50,000 Indians and Americans have registered.

This event is to take place on September 22. There will be a 90-minute extravaganza with 400 artists to showcase the cultural diversity of the Indian-American community. More than 60 US lawmakers have been said to attend the event

The Prime Minister will hold talks with US President Donald Trump and will review the bilateral relations in order to bring even more benefits to both countries and its people.

Modi will also be honoured with the Global Goalkeepers Goals Award 2019 from Bill and Melinda Gates Foundation.